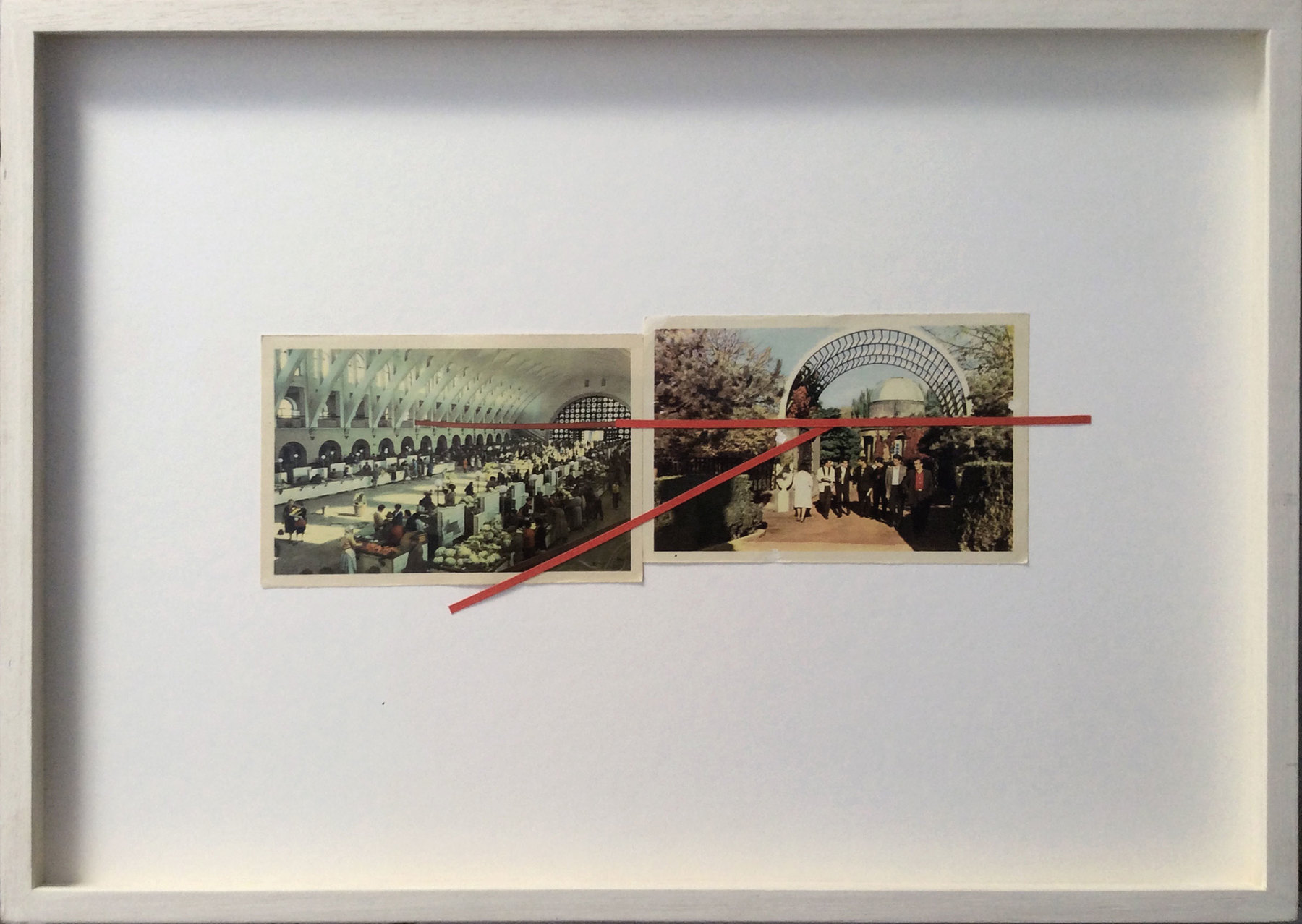 Mixed media, photograph on paper
37 x 52 cm
Signed/stamped on the back

The Red Line is part of a trilogy of works (which includes The Blue Line & The Black Line) produced out of the same pool of images as A Small Guide to the Invisible Seas, sourced from Greek, Turkish and Soviet Armenian tourist catalogues, from the 60s to the 80s. Instead of weaving together the diverse found material in an invisible new topography, the trilogy questions the construction of national identities by exploring specific recurrent symbols associated with each of the nation states. Where A Small Guide to the Invisible Seas unearthed new topographies through gaps and layering of images, the new works abstract, take over through lines and colours what has already been constructed. Referencing both the censorship line and the visual language of constructivism, the insertion of the line is also a humorous dismantling gesture. In The Red Line, images of the great Soviet industrial operation are piled up, forced into a single space, reinforcing that glorious moment of construction, only to be interrupted by that infuriating red line of abstraction that breaks up, interrupts any sense of ideological unity. It is the red line that cannot be crossed and at the same time the line (the ideology) of the Soviet state.

Courtesy of the Artist
Thessaloniki, Greece

Aikaterini Gegisian (b. Thessaloniki, Greece) is a visual artist of Greek-Armenian heritage that lives and works between the UK and Greece. Investigating, assembling and deconstructing archives of popular culture, she has developed a rigorous research-based practice, that examines the role of images in the production of national and cultural identities. Working across video, photography, installation and collage her work utilises a variety of audio and visual material, ranging from found images, location footage, archival and popular films. After a period of questioning the image as a historical document, her recent work marks a formal and conceptual shift towards gender identities, the sculptural qualities of photographic images and the photobook form.

Gegisian received a BA (Hons) in Critical Fine Art Practice by the University of Brighton (2001), an MA in Fine Art by Chelsea College of Art and Design (2005) and a PhD by Practice by the University of Westminster (2014). In 2019, she was an International Fellow in Art and Theory at Künstlerhaus Büchsenhausen (Austria) and in 2018 a British Kluge Research Fellow, at the Library of Congress (US), where she developed the ambitious archival project, Third Person (Plural), produced with the support of Arts and Humanities Research Council, UK and Arts Council England. In 2015, she was one of the exhibiting artists at the Armenian Pavilion, 56th Venice Biennale, which received the Golden Lion for best national participation. She has been awarded the Nagoya University Award in 2001, and she was shortlisted for the First Book Award in 2015. In 2016, Middlesbrough Institute of Modern Art organised the first survey of her moving image practice.