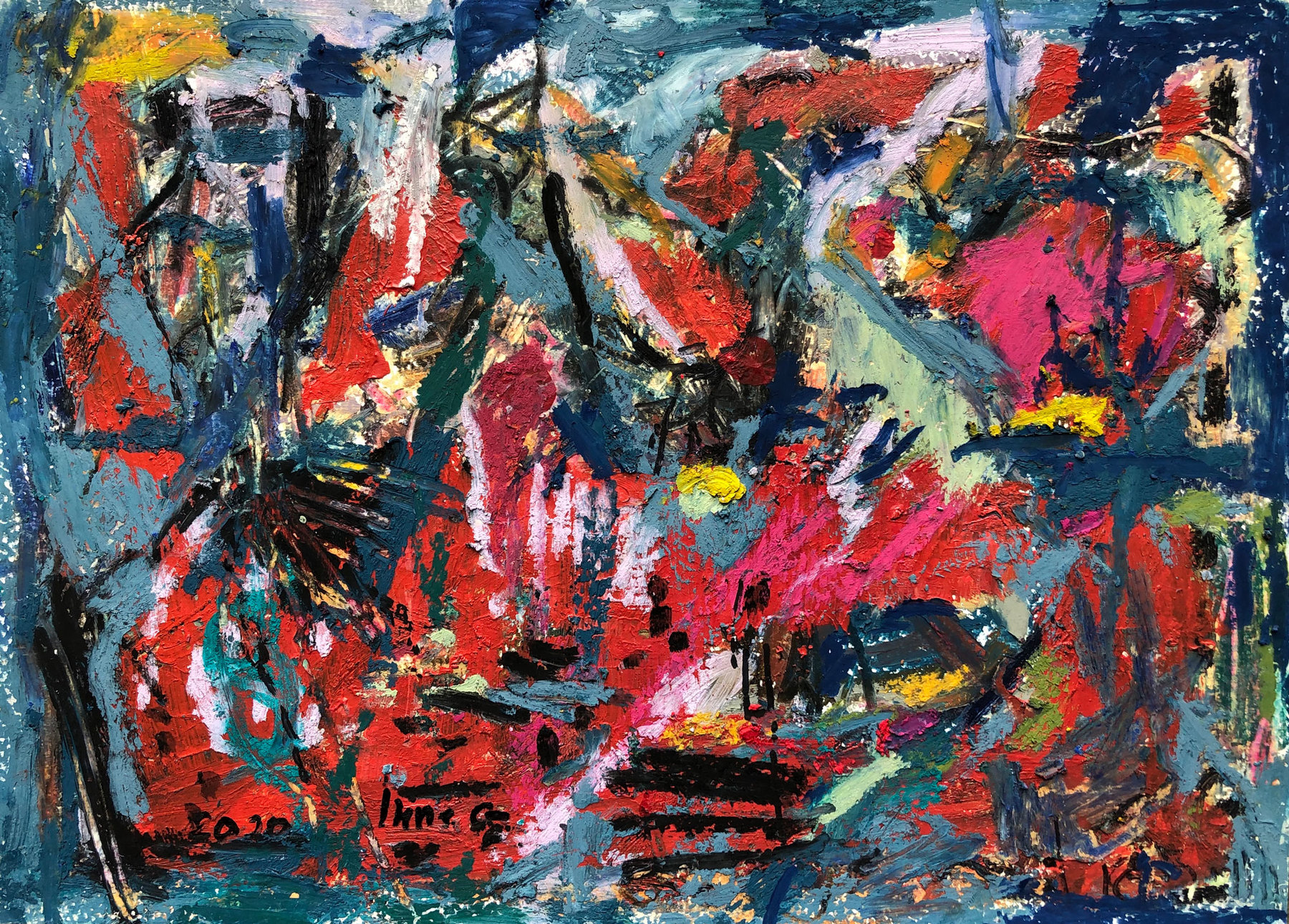 In this free composition Irene engages in the colors and expresses herself with energetic strokes. The colors used are mainly red, to insinuate the spilled blood, the blue derivatives which suggest the sky to which Armenians aspire, and finally the touches of yellow suggesting their perseverance and glow of hope.

Courtesy of the Artist
Beirut, Lebanon

Born in Beirut, Lebanon in 1970, Irene Toufic Kahale is a bundle of joy and energy raised during the dark years of the Civil War (1975-1990). From a very young age, Irene developed an appetite for life, which she decided to put on canvas. Amidst the darkness surrounding her, she juggled colors and composition and is best known for her abstract expressionism.

Irene’s work depicts the amalgam of emotions experienced throughout her journey, going from the civil war to the worldwide trips she’s undertaken. Her style displays the influence of a variety of western painters such as Henri Matisse, Helen Frankenthaler, Willem de Kooning, Jean-Michel Basquiat, Joan Mitchell and more, as well as Lebanese artists such as Chafic Abboud and her own professors, Yvette Achkar and Halim Jurdak.

The painter’s career officially started in 1988, when she decided to study Fine Arts at L’Académie Libanaise des Beaux-Arts (ALBA). On the night of her 20th birthday, as the civil war was about to end, Irene got hit by a rocket and ended up in the hospital, severely wounded, requiring more than seven surgeries and six months of rehabilitation. After this pivotal experience, Irene grew stronger and wiser, and her curiosity for the world around her rose exponentially. Encouraged by her parents and her future husband, Ismat Ghanem, she was able to resume her studies and thrive amidst and despite the country’s economic instability and civil war.

In 1992, she moved to France where she joined several workshops at Académie de la Grande Chaumière (1992-1995) and L’association Artistique de Marly le Roi et ses Environs – LAME (1994-1995). During that time, the young painter mastered the art of human anatomy and sharpened her quick-sketches’ skills. In 1995, Irene moved to Los Angeles, California, an awakening trip that would expose her to the American culture and the inspiring art of Willem de

Kooning. After several enriching voyages, Irene returned to her home country Lebanon in 1997, with a head bursting with ideas and inspirations.

It is only in 2002 that the artist resumed her final year in Fine Arts at ALBA whilst preparing for her upcoming exhibitions. Between 2002 and 2006, Irene has had the chance of showcasing her work at several art exhibitions, restaurants and galleries in Lebanon and abroad: the UNESCO/ALBA exhibition (Beirut, 2002), Daraj el Fan (Beirut, 2003), La Posta Restaurant (Lebanon), La Libée Restaurant (Canada) and Le Créateur Français Gallery (France).

For years, Irene, a painter, a wife and first and foremost a mother, put her career aside to take care of her family and raise her children, Noelle, Diane and Boutros. As she drew oil pastel and aquarelle sketches in her notebooks for the simple pleasure of it as her children grew, she was able to revive and nurture her passion for the arts. She opened her own Atelier Irene Ghanem in 2014. One year later, Irene held a sold-out exhibition in collaboration with the German Cultural Center in Lebanon (2015). She was then invited to exhibit her artwork at the ALBA Exhibition 2017. More recently, in 2019, her paintings were exhibited at Musée Paul Guiragossian (Lebanon) and the Beirut Art Fair.