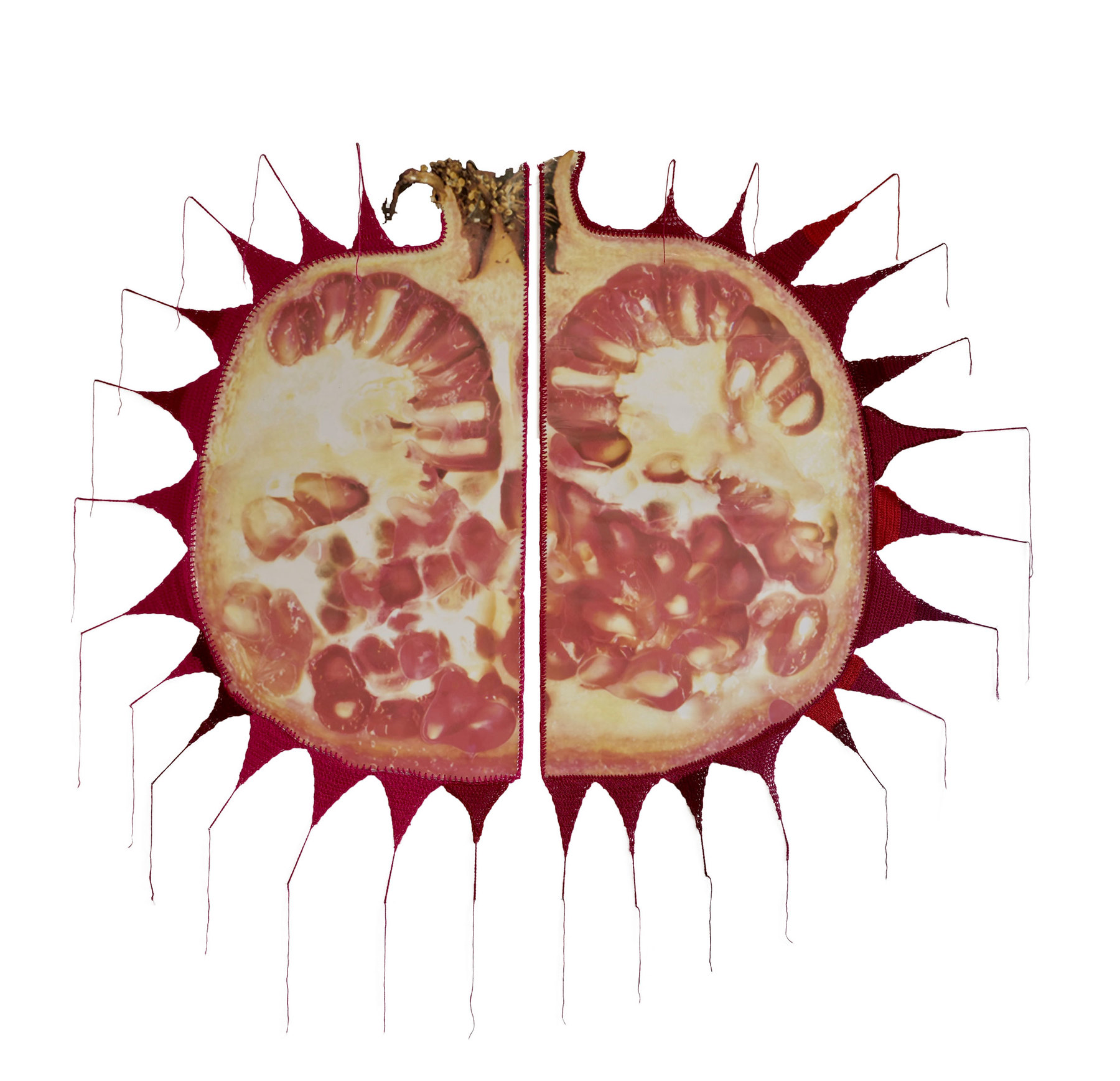 Nur, from the series "The Texture of Memory". In "The texture of Identity" Der Megherditchian combines the digital photo of a sliced pomegranate with wool threads. Her grandfather survived the genocide in Turkey in 1915 only because he hid for days on end on a pomegranate tree. Shimmering between bloodstains and signs of paradise, the work calls up the memory of the genocide of the Armenians in Turkey, which is one hundred years old this year. Ingo Arend

Granddaughter of Armenian immigrants to Argentina, Silvina Der Meguerditchian lives and works in Berlin since 1988. Her artistic work deals with issues related to the burden of national identity, the role of minorities in society and the potential of a space "in between". Der-Meguerditchian is interested in the impact of migration in the urban texture and its consequences. Reconstruction of the past and the building of archives are a red thread in her artistic research. Her work is multidisciplinary and uses different media. Since 2010 she is the artistic director of Houshamadyan, a project to reconstruct Ottoman Armenian town and village life. In 2014/15 she was awarded with a fellowship at the Kulturakademie Tarabya, a residency program of the German Foreign Ministry and the Goethe Institute in Istanbul. Der Megurditchian further participated in "Armenity", the Pavilion awarded with the Golden Lion at the 56th Venice Biennial for the best national participation. Her work has been shown in many exhibitions around the world, including, Germany, Argentina, USA and Turkey. Her last initiated and coordinated collective project "Grandchildren, new geographies of belonging" (DEPO Cultural Center- Istanbul) was supported by the Goethe Institut and the German Foreign Ministry in 2015. In 2018 she participated at Hello World. Revising a Collection, a critical inquiry into the collection of the Nationalgalerie and its predominantly Western focus at the Hamburger Bahnhof in Berlin. Since 2014 she works with “Women mobilizing memory“ a group of artists, writers, theater practitioners, museologists, legal scholars, social activists, and scholars of memory and memorialization, who focus on the political stakes and consequences of witnessing and testimony as responses to socially imposed vulnerability and historical trauma. It probes how individual and collective testimony and performance can establish new forms of cultural memory and facilitate social repair.