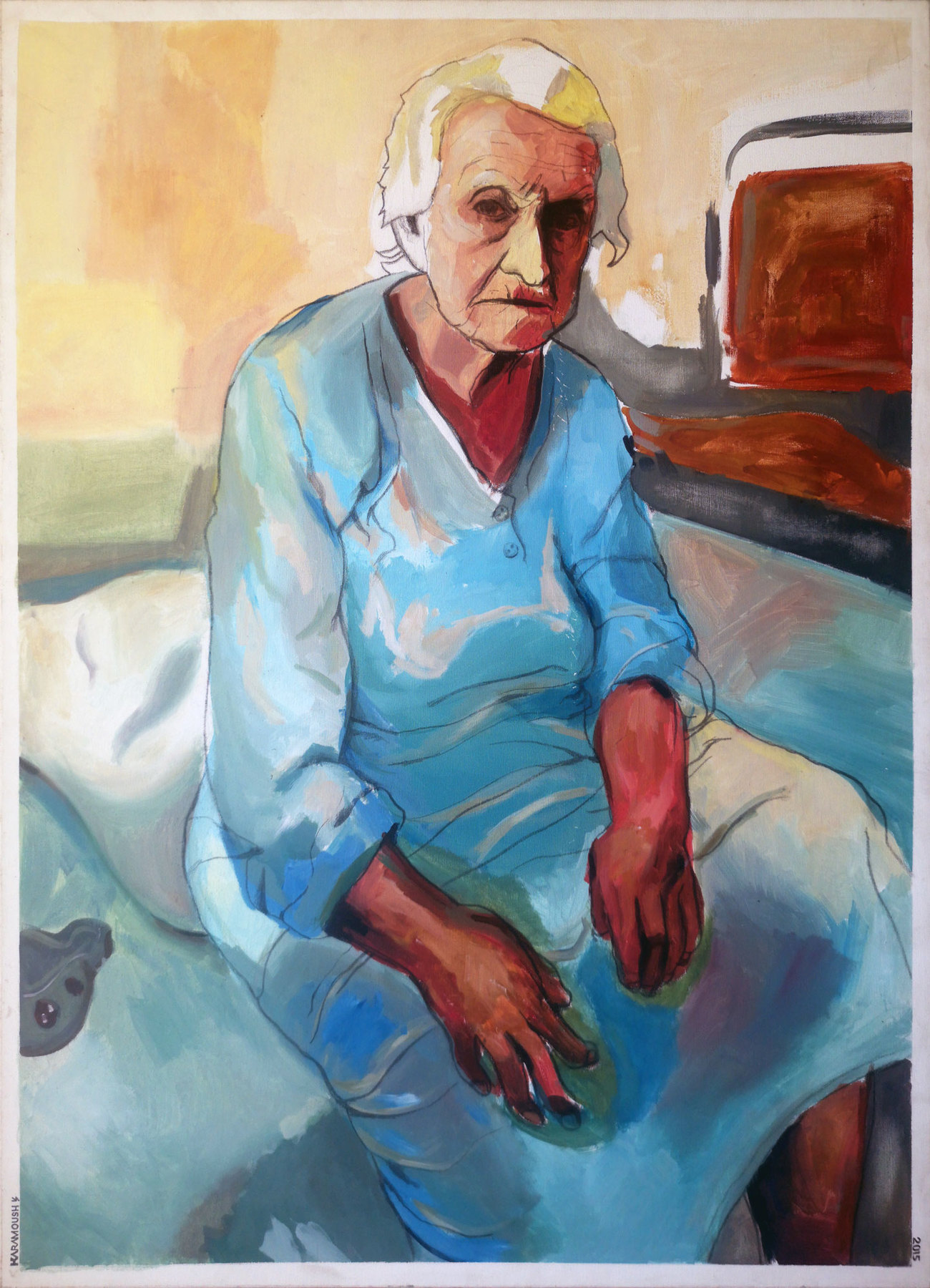 I created this artwork at a time when, due to various circumstances, my family was forced to put my grandmother in a retirement home. I would visit her whenever I longed for her unconditional love and simple glow and presence. Eventually, I realized that her situation was deteriorating, therefore I decided to take a series of photographs of her seated on the bed at the retirement home. Finally, I captured her expressions from the series and merged them in a triptych before she died. This artwork is the first of the series. I used acrylic paint to capture the immediacy of the gestures in the moment and create a sort of movement throughout the work. I focused and outlined her portrait in charcoal to create a sort of permanence, a boundary between her fading background and her being because it didn't matter to me, wherever she may be, she will always be present. I emphasized and exaggerated her special features, such as her twisted and crippled fingers, and the wrinkled texture of her skin due to old age. I was captivated by her facial expression, so full of hope, love, and despair all at once.

Courtesy of the Artist
Beirut, Lebanon

Moushegh Karavartanian is a Lebanese Armenian artist, born in Beirut in 1992. His work focuses on canvas paintings using acrylic and oil paint. He has created many murals of various sizes as commissions as well as volunteer work, and participated in several local and international collective exhibitions including “Heritage of Emotions” at Gallerie Nikki Diana Marquardt in Paris, France in 2016, “Project Proletkult” at AUB Byblos Bank Gallery in Beirut, Lebanon in 2016, and “Provoking the Aesthetic Experience In the Quotidian” at Sole Insight in Beirut, Lebanon in 2016 and 2017. Moushegh holds a BA in Fine Arts from Lebanese University, Institute of Fine Arts (2015), and is currently pursuing his master’s degree in Fine Arts at the aforementioned institute. He attended a private workshop at "Atelier d'art" for over 6 years during childhood. Moushegh Karavartanian lives and works in Beirut, Lebanon.

Moushegh Karavartanian sites the visionary works of classical masters of the Renaissance and Baroque Era as major influences for his artistic style, mannerism, and subject matter. He is constantly fascinated by the coded language and symbolism used in art and painting to communicate intricate concepts, ideologies, emotions, and mythology (Egyptian, Greco-Roman, Tibetan, Hindu). Moushegh believes that the divine speaks to us in metaphors, and as such, finds refuge in expressing his understanding and experiences of the divine through symbolism.

Although the subject matter of Moushegh’s works does not abide by reality and the laws of physics, his style in rendering is nevertheless grounded in realistic figuration, much like the surrealists and visionary artists of the past.

Moushegh initiates his artistic endeavors with an instinctive urge to express intricate spiritual subjects with their underlying concepts and emotions according to his perception and understanding of reality, and layers his work with realistic depictions of the protagonists and the surreal mythical atmosphere to render it more comprehensible. He does not restrict his palette to a specific range of colors, as life is limitless, and art is an immaculate reflection of life through an individualized lens. His works are evidences of cathartic experimentation.