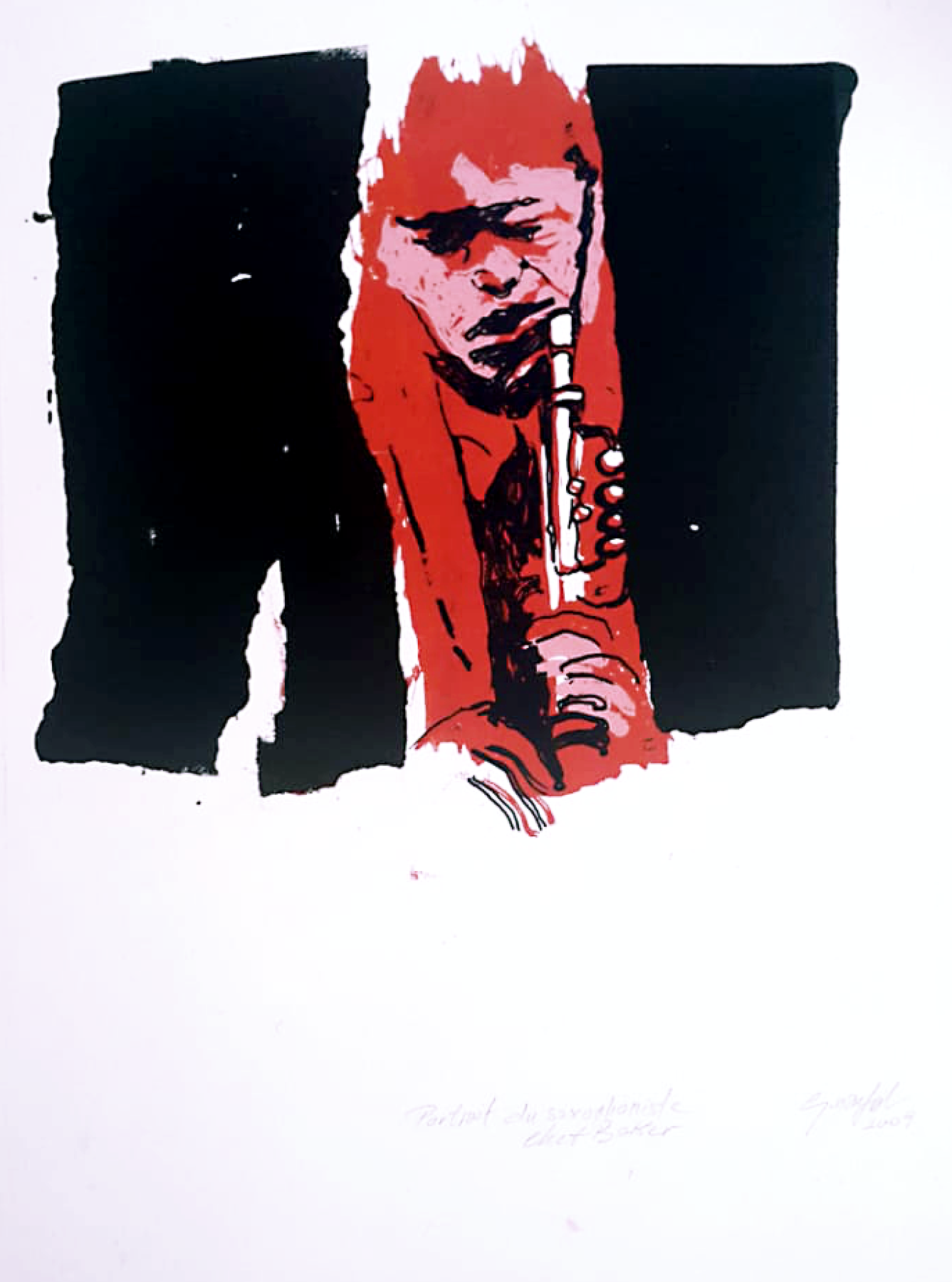 This artwork is part of the ‘Jazz Portraits’ series done between 2009 and 2012 and features in the book Jazz Pulse published in 2018. Often reflecting on the environment that surrounds her, Greta Naufal experiments with various media including painting, printing techniques, video and installation. As one of the artists from the ‘war generation’ with a distinctive expressionist style, Greta Naufal produces work in direct relation with the city she lives in and the times often reflecting on conflict and media, human resilience, body and identity. She also finds inspiration in jazz as a movement against oppression, and its legendary musicians who have strived for change. Whether through interrogating her fluctuating relationship with Beirut, or through exploring the human condition, or through denouncing violence under all its forms, Greta Naufal’s artworks remain strongly rooted in the contemporary space and time which we live in and never fail to surprise with their poetry and power of intuition.

Greta Naufal is an artist born in Beirut, Lebanon. Since 1982, she has been exhibiting in various Arab countries (Lebanon, Egypt, the United Arab Emirates) and abroad (China, France, Ireland, Norway, Sweden, and the United Kingdom). She received the Jury’s Prize for painting from the ‘Salon d’Automne’ at the Sursock Museum in 1995, the Jury’s Prize at the ‘Biennale of Alexandria’ in 1998 and the Jouhaina Baddoura award of recognition for Lebanese artists in 2016. Her work has been featured in numerous books including The Collection of the Sursock Museum (Sursock Museum, 2000), Beirut, Beirut (Saqi Books, 2009) and It’s Always Been: Contemporary Art from Lebanon (Imago Mundi, Fabrica, 2018). In 2018, she published two books: Jazz Pulse (Preface by Etel Adnan and essay by William Wareing, Antoine, Lebanon), a monograph of her work on Jazz music, and Greta Naufal: A celebration of three decades of art education (Collège Protestant Français, AEFE, Liban).
She is a member of the artists’ collective KKV in Stockholm as well as the Association of Lebanese Artists. Her work is part of the private collection of the Royal Museum of Stockholm, the Millesgarden Museum, Sweden, the Sursock Museum, Lebanon, the Lebanese Parliament and the National Library of Beirut. She has taught Fine Art and History of Art in a number of academic institutions since 1983 and is currently member of the faculty at Lebanese American University.