Associate professor of Arts and Design (5-year chairperson) at the Lebanese American University, Architect since 1981, and mainly Painter, my work has been featured in collective exhibitions in Beirut, the Arab world, Europe, and the United States as well as appearances in International refereed Art publications.
Awarded internationally in 2000 by the Prince of Wales and Secretary General of the U.N. as one of 12 Prizewinners of the World-Wide Millennium Painting Competition in order to commemorate the new millennium and locally at the Sursock Museum (twice with a special mention) and with the Shield of the Lebanese Ministry of Culture & Higher Education. He also received multiple other awards in other international art competitions. 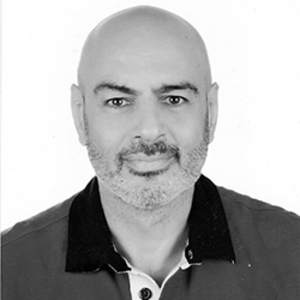