A collaborative exhibition by Afaf Zurayk, Noel Nasr and Rami Saab explores the role that light and art can play in bridging differences

A collaborative show currently on display at Beit Beirut gives an added dimension to a thought-provoking series of paintings by the Lebanese artist Afaf Zurayk. 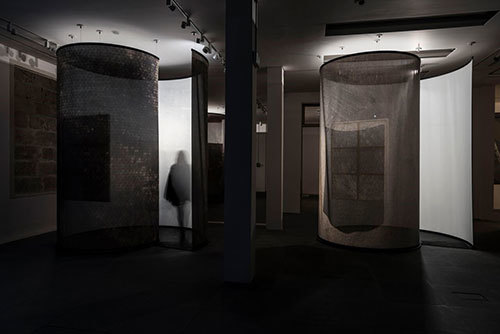 Titled ‘Shifting Lights’, the exhibition provides viewers with a unique opportunity to step inside the works on display and experience a truly private audience with Zurayk’s art.

This unusual and holistic show serves as a platform for Zurayk to express on canvas her fascination with the way light evolves in time and space, with input from the artist’s colleagues and long-time friends, photographer Noel Nasr and architect Rami Saab.

“I’ve always felt that light has a multitude of connotations, whether we show it coming through the darkness or shifting,” she explains. “I was especially preoccupied with the idea of darkness as a sort of bridge to be crossed that would take us beyond and into the light which is always behind the darkness, as if going through a forest, rather than a barrier.”

At the core of the paintings lies Zurayk’s acute awareness of the intrinsic complexity of our humanity, which is expressed through both technical and emotive layering. 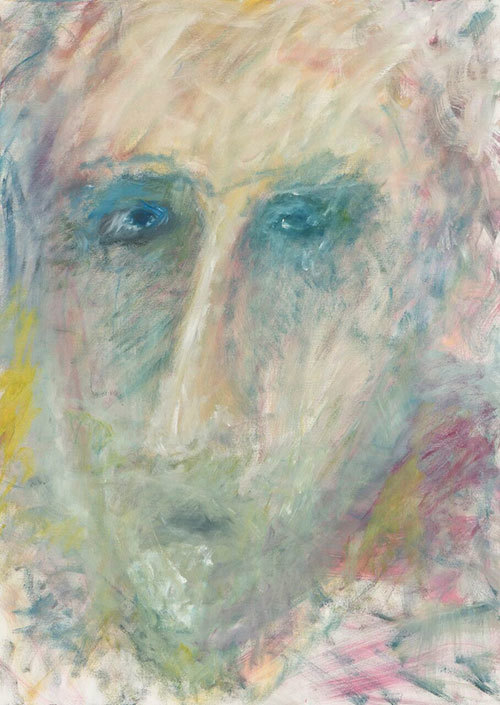 While the artworks began life as a series of portraits, they very quickly evolved into “presences or spirits” which, Zurayk explains, convey multiple emotive states simultaneously. “These ‘layers’ confront the viewers and engage them in an examination of their own complexity,” she continues.

She explains that the concept for the show took root when the trio were chatting in her studio about a series of paintings that she’d done. “I knew Rami, from when he signed up for a course I taught, and Noel was often at my studio as he archives my work,” she says. “We got talking about the presentation of the paintings and thought it would be interesting to find a way of helping the audience to engage with the work at a deeper level.”

Her collaborators’ involvement enriches the show on many levels, adding extra layers to the project and reinterpreting the themes that Zurayk explores. “Noel took photos of details of the paintings as I was doing them, while Rami then shaped these elements and built them up into three-dimensional structures,” she explains.

As a result, when visitors arrive at the exhibition, rather than simply looking at the paintings, they have to enter one of Rami’s structures to view the artwork. “This makes the viewing a very personal experience, one of being both enveloped and isolated, but also one of choice,” Zurayk explains.

A key feature of the exhibition is the fact that because of the way the light hits the inside of the pods, the viewer is unable to see outwards, but onlookers can see the person within the structure. “This factor adds another layer of visibility and transparency, something brilliantly conceived by Noel and Rami to complement the two-dimensional painting,” Zurayk says.

Her fascination with light is a longstanding one, dating back decades. “I’ve always been interested in light, from reading about both ancient beliefs in fire and light and those of Islamic mystic writers,” she says. “I feel connected in terms of the philosophical emotive aspect, but also the other possibilities light offers, including as a means to understand our realities.”

Zurayk recalls a series of oil paintings she did back in 1982 of the human body, conceived as volumes and shapes, in which light is conveyed entering and then leaving the subjects. “There are many ways I interpret light through my work,” she notes. “For example, in another series I explored the concept of rebirth, of being born again on a new morning when light breaks through and softly hits the body.”

Asked about the audience’s reaction to the show so far, she recalls how a number of visitors have told her that they approach this unusual viewing process in an almost ritualistic way, taking time to prepare to enter the pods. 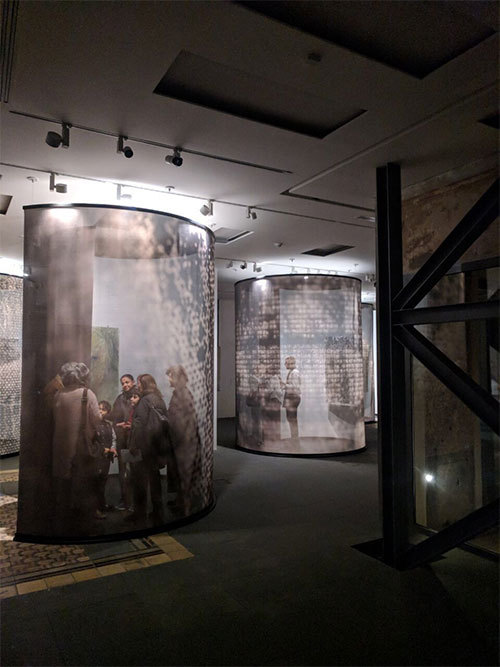 The entire experience is also enhanced by the background music of compositions by romantic German composers which Zurayk listens to when working. Both music and poetry play pivotal, but very different roles in the realisation of Zurayk’s art, as she explains. “I find that this music helps me to reach places in my being that are otherwise too painful to access, opening up all the wounds and places in my being that I’ve found difficult to visit, allowing me to go deeper into my soul,” she says. “But I like people to view my work by interacting and engaging creatively and emotionally, so we become part of each other’s experience.”

As both a writer and reader of poetry, Zurayk explains that “words” address a different side of her being. “Poetry is more conceptual than emotional, something I relate to intuitively that addresses another part of who I am,” she says. “Music and poetry are two different kinds of experiences, but painting brings everything together.”

She admits to never knowing what she’s going to do or when, saying, “I don’t have a regular hour when I write or paint. Sometimes I’ll be in the middle of a simple task, like washing the dishes, and a verse will come to me, then, after getting it down, I’ll have the basis for a whole poem.” 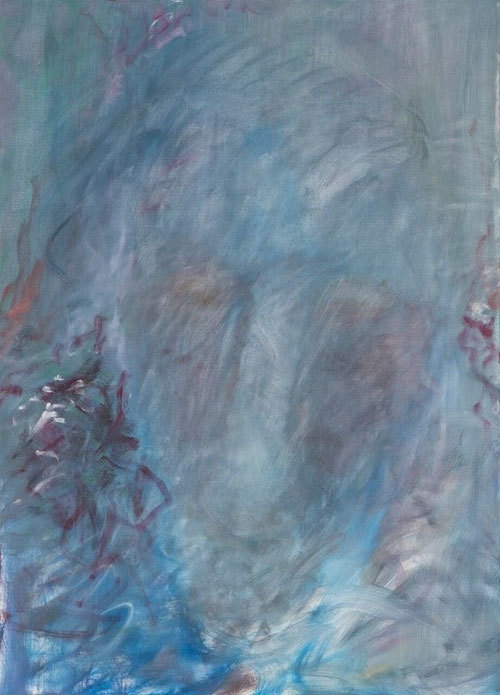 Zurayk’s work is firmly entrenched in the understanding of common human heritage on both an individual and collective level. Given both past and regional events, this includes responding to the turmoil she sees around her and the influence of earlier conflicts.

“I was born in 1948, so felt the influence in my youth of the revolution that my parents’ generation experienced and, also, global events, such as Vietnam. All these events affected me,” she says. “I’m not a political person, so I figured the only thing I could do was paint and hold on to my belief that there must be another way of dealing with each other than solely through force and violence. I’m a firm believer that light and art can help us to transcend and bridge our differences.”

Zurayk explains that she gave herself a free rein with the current works on show, with the only specifics being the size of the canvases (140cm by 100cm), and the media she selected of oil, charcoal, graphite and chalk. 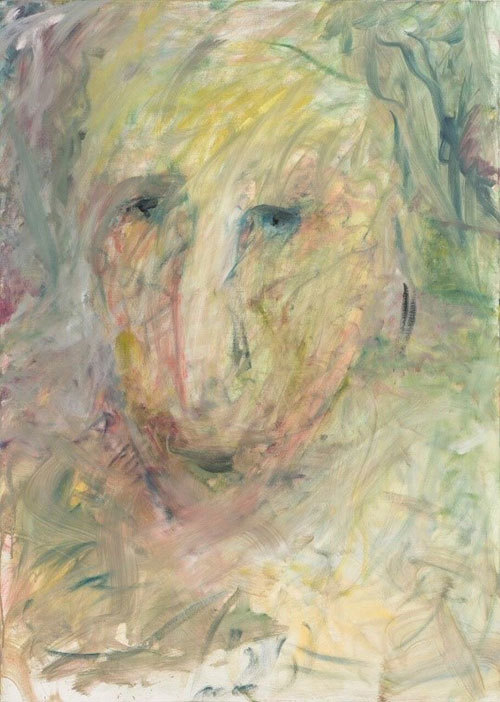 Using mixed media was something she began on her return to Beirut from the US, she explains. “I was doing a series of nude abstract figures and at that time they were knocking down the apartment building where I grew up,” she says. “I walked past every day and decided I wanted to work with the twigs amongst the rubble instead of brushes. It felt like I was drawing energy from where my childhood had been and utilising it as a grown woman.”

The fact that her views are not only conveyed sharply in ‘Shifting Lights’ but magnified through the work of her colleagues helps her to “sleep soundly”, she says with a smile.

“It’s beautiful that despite the emotional turmoil of doing a show, here we are, three people from different generations, backgrounds and histories, connected by a basic belief in humanity, who’ve come together to form one beautiful expression of togetherness,” she says. “I am not here to preach or convert, but hopefully to touch minds and say this is an option I believe in.”