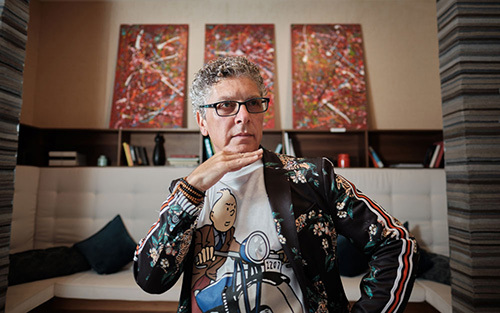 While decades have passed since the Lebanese-born artist Tony Seker found himself sporadically uprooted with his family to escape conflict, those years spent moving from country to country have remained a powerful influence on his work in many ways, from the bold, bright colours he favours to an overarching message urging us to be less judgmental about others.

In fact, the vibrant colours that are a hallmark of Seker’s work came about by chance initially, when he was forced to improvise while painting his much-loved model war airplanes – toys he’d chosen to take with him when the family were forced to make a swift exit from Lebanon. “I realised that I didn’t have the standard camouflage-coloured paint or the brushes that came as part of the set, so decided to just use what I had – bright colours and substitute tools,” he explained. “I’ve never really looked back.”

As a teenager dealing with the frustration and anger of having his idyllic childhood in Beirut cruelly taken away from him, Seker also became increasingly aware that by painting the planes in the military standardised colours when younger, he’d been buying into the consumerism of war. “Switching to the bolder colours I’d found and working with moving instruments like cardboard and scrapers gave the work a more abstract form which I much preferred,” he said. “They definitely became the drivers for my style and method today.”

Memories of his early life in Lebanon – both the colours and the cacophony of noise – were also the inspiration for the name he works under, which is ‘Claxon du Soleil’, loosely translating as Blast from the Sun. Seker, who is today based in New York, explained that leafing through an edition of the Guinness Book of World Records– another childhood pastime – he discovered that Lebanon held two world records: one for the largest bank robbery and another for the most car horns, or klaxons, sounded per minute per square kilometre. “As a kid I always enjoyed the sounds of Beirut,” he said. “They were a strange mixture of street vendors chanting, cars honking and chickens clucking, but somehow they seemed to combine to produce a fantastic symphony. I felt that the sound ran in parallel to my artistic expression – loud, colourful and all-embracing.” 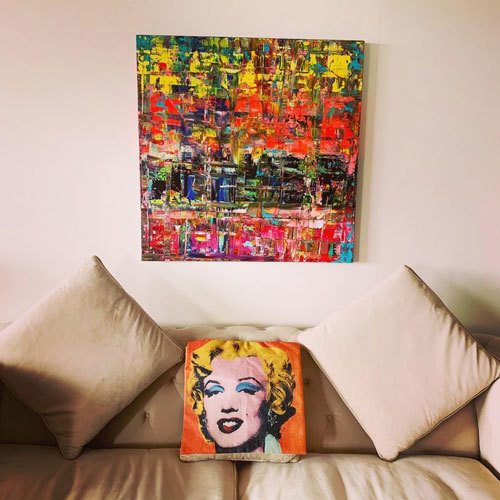 One key theme that can be traced back to those early years and permeates almost all of Seker’s work in one way or another is his desire for us to refrain from making quick judgments about others. “Spending time in different countries, I saw and felt the judgments, as well as the different attitudes people had towards the privileged and the underprivileged,” he said. “I realised that some people are luckier than others purely by circumstance.”

Works such as ‘Beyond dogma’, are tangible examples of his feelings on this issue. In the painting, symbolism, in the form of wavy lines, and elusive motifs appear to be guiding the viewer to a solution, but, as Seker explained, the truth is far more complex. “I wanted to relay the message that our auto-response is based on our own experiences, including dogma,” he said. “Perhaps by learning to wind in those impulses, we can become less inclined to draw immediate conclusions from what we see.”

While some artists might feel weighed down by the problems of the world, Seker, perhaps surprisingly, finds himself motivated by them. “As an empath, I naturally live somewhere between exuberance and pain, but when I’m painting, I can often get into a zone where the world as I think about it disappears,” he explained. “Instead, my ‘action’ style of painting, between the flow of paint and small and large movements, becomes a dance with the universe. I feel I connect at a higher level.”

Yoga, which has been an important part of Seker’s life for several years, plays a vital role in helping him stay focused on his work and practise exercising non-judgment, even in the current unprecedented circumstances that the world finds itself in. 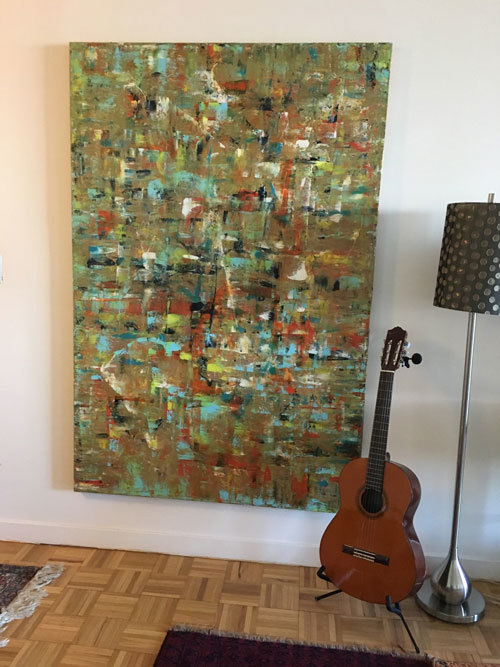 Recognising the irony of his words, Seker admitted that the coronavirus pandemic has provided him with welcome time to ‘breathe’. “I’ve also moved studios, so it’s been refreshing to take some time between projects,” he said.

He has now begun channelling his energy into a new series he calls Cave Art, which, as the name suggests, is inspired by the etchings that cave dwellers created in ancient times. “I love the primitiveness of the subjects and themes,” he said. “There’s also a humorous element to the pieces which involves poking gentle fun at the way in which we like to intellectualise so much around us, including art!”

With its roots in ancient humanity, the Cave Series is also a reminder of the importance Seker attaches in his work to the rich and diverse tapestry that makes up humankind. The strength of feeling he has on this issue is evident when he is asked to choose a career highlight to date.

“Yes, there have been many great moments, such as being selected for the Artist Choice award,” he noted. “But if I’m being honest, the relationship I’ve built up with a long-term client is up there with that. He’s Jewish-Armenian and from Iran, while I’m of Lebanese-Turkish descent and living in New York. Art and friendship have enabled us to not only put aside our cultural differences but embrace them, and that’s very special.”