The rise and rise of Iranian art

d’Angers Gallery was launched in Semnan Province, Iran with the goal of expanding and pushing forward the art and culture of Master Artist Seyed Asadollah Shariatpanahi’s hometown. With the wide range of activities performed so far, do you believe you have been able to educate the public and help deep Iranian art and culture?

In my opinion, which is aligned with the opinion of many artist-activists, d’Angers Gallery has a great reputation and we have received positive feedback on our efforts. In the mid 20th century, a number of foreign-educated artists returned to Iran and began training and inspiring a new generation of Iranian modern artists, including Seyed Asodollah Shariatpanahi.  This influx of artists and the new generation they inspired led to the expansion of a very strong and capable modern art world in Iran. Thanks to Shariatpanahi’s five decades and more of research, practice and teaching, the Iranian art world has again given birth to a new generation of artists who have all gained spectacular artistic positions internationally, including Reza Derakhshani, Ahmad Amin-Nazar and Masoud Sadedin. These amazing talents can be considered great ambassadors of Iranian Modern Art, proving that though they are rooted in great Persian traditions, the culture is now a major player on the global modern art scene.
Over the past two decades, and especially in the past couple of years, Iran has experienced a period of social and economic change and d’Angers Gallery was created on the basis of current circumstances to support talented artists and introduce them to the world.

How does d’Angers Gallery select its artists and what can you tell us about what they bring to the table?

With several art schools and universities located in Semnan and its suburb, we continue to discover fresh and young talented artists who are ready to emerge and be seen. d’Angers Gallery has also been working alongside domestic and internationally recognized artists, creating powerful relationships. Artists reimagine their art differently from one another. Each has their own unique voice, visualisation and technique. Directly or indirectly, they are influenced and inspired by just about anything: their life, childhood, environment, humanity or anything they experience. Hence, as d’Angers Gallery adds to its value by selecting artists from various genres and backgrounds, the artists continue to mature on their individual journey.

In your opinion, what differentiates Iranian art from other art in the Middle East?

History demonstrates how in literature, theatre, music and art in general, Persians have had a long history of being the leading voice and pioneers, distinguishing them from rest in the region. Art is related to and springs from its surroundings. Artists cannot execute an idea and create valuable pieces without an in-depth understanding of history as well as social and traditional aesthetics that eventually becomes a concept for an art piece, meaning a concept for an artwork takes precedence over the aesthetics and the actual making of the piece becomes an irrelevant factor; almost an afterthought.

What are the challenges Iranian artists working in Iran face and how do you think they overcome them? Also, what do you believe to be their sources of inspiration?

The biggest and most important challenge they experience is connecting with the artist community outside of Iran as well as the art venues overseas. Therefore, in order to avoid centralization, d’Angers Gallery attempts to go beyond the borders and shift its focus from nativism, which is just supporting its local artists, to creating a dialogue with international artists. Since the Islamic Revolution and experiencing changes in social norms, Iranian artists have developed brand new concepts through their works, such as Environment Movements, Immigration, Marginal Man and post-modernism.

Who are the major buyers and collectors of Iranian art?

Since 2006, and after Iran became part of operating international auctions in the Middle East that are usually held in Arab countries, a large number of pieces by Iranian artists have been sold at record-breaking prices. This trend has been continuing at American and European auctions as well. With millions of Iranians living abroad, Persian art has undoubtedly been an influence all over the world, including Iranian art exhibited at Art Basel, Istanbul Biennial and Abu Dhabi Art Fair, among others. Such fast growth is a clear reflection of global interest in Iranian Art. Today, I believe that in addition to our local buyers, European and Western collectors should also be considered as our current and potential buyers.

Art from Central Asia and the surrounding areas is currently in demand. Why do you think this is and how is it maintaining its popularity?

We should bear in mind that this area of the world is evolving on a daily basis.

What are your future plans for d’Angers Gallery?

d’Angers is focusing primarily on three areas: content production and documentation; presentation and the recognition of Iranian artists at international venues; and participation at auction houses, secondary art markets and exhibitions outside Iran. 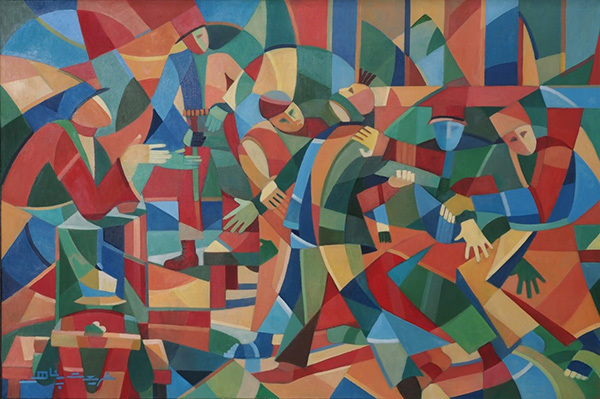