Rising From the Ashes

Rising From the Ashes

In his forthcoming exhibition ‘Building with Fire’, which takes place at the iconic and specially chosen L’Orient Le Jour premises, the artist Jean Boghossian examines the highly topical destruction-rebirth cycle, in his own, inimitable way

The use of a blowtorch to produce fire and smoke in art remains a rarity among artists. How did you discover this way of working and realise that it helps you to achieve your desired results?

After a great deal of research, I came across fire, which was an element I often encountered during the wars I lived through. I’d also used it to melt metals as a young apprentice jeweller. I always say that fire chose me, since what I thought would be an experiment of just a few months ended up becoming an ongoing and inexhaustible source of inspiration for me. By putting fire on trial, I discovered new techniques and new plastic forms. Often a canvas leads me to the next one and I find it impossible to stop; it’s a bit like a drug. What I like about fire is that it cannot be easily tamed. It’s burned me many times and carries a risk that makes my work more intense and exciting. 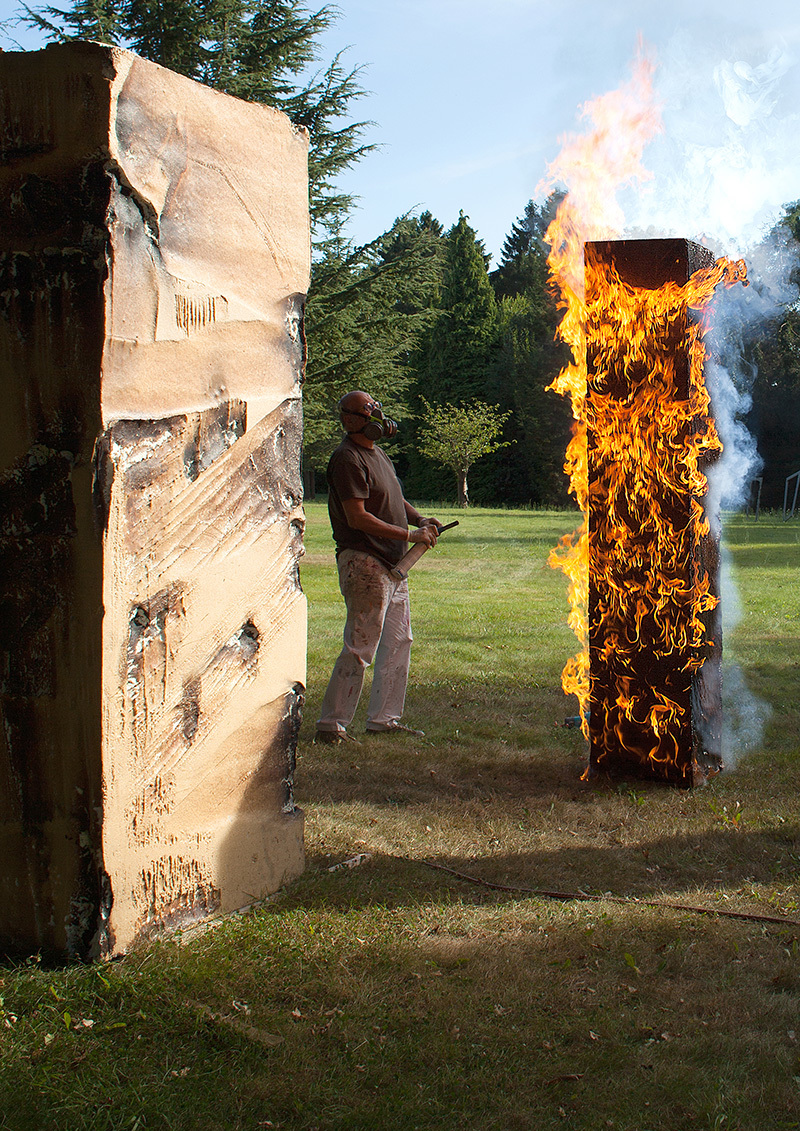 Jean Boghossian at the Louvranges Atelier in 2016

How do you respond to those who say they find it difficult to reconcile the poetry and harmony that some see in your work with the ‘violence’ used to produce it?

Violence and poetry are not incompatible. We can talk poetically about war because poetry makes pleasant what is not. It’s the same with music; for instance, Shostakovich's Symphony No. 8 denounces the horrors of war. Poetry can sometimes emerge from chaos. I think, then, that it’s up to the viewer to consider the degree of poetry in an artwork, since it comes down to criteria that’s very personal. For my part, I’m always looking for a certain harmony when I use smoke to unite the various pictorial elements on the canvas or fire to allow the colors to fade and blend in with each other. 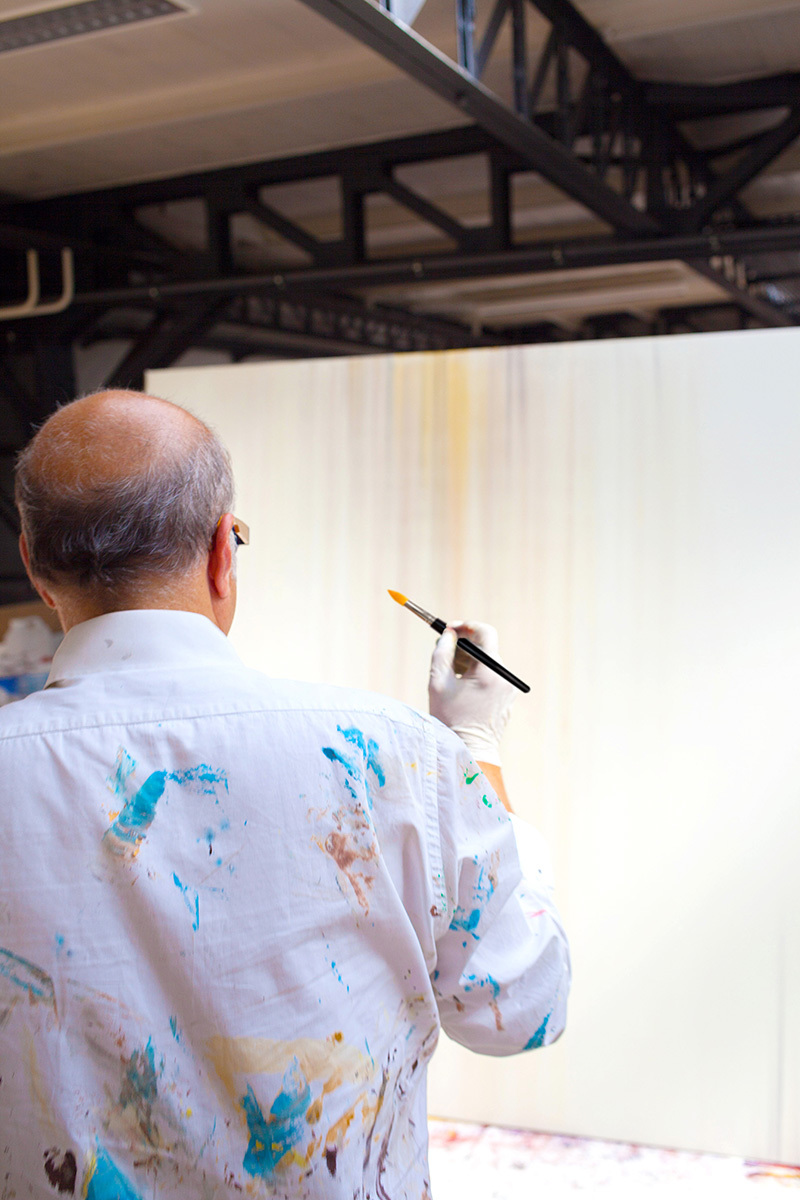 Jean Boghossian at the Schlumberger Atelier in 2016

Burning can be used to preserve in a positive sense, as well as to mark in a negative way. To what extent is giving your artwork an element of permanence traceable to your Armenian roots?

In my work, I conceive of fire not as a destructive element, but rather an element capable of purifying the soul and the spirit, for destruction is always followed by rebirth. For instance, in the installation I made for the Venice Biennale last year called Sorgente (Source), I used fire to open a reflection on the preservation of a culture against the numerous attempts made to reduce it to nothingness. By displaying burnt books at the foot of burnt polystyrene panels suggesting engraved scriptures in stone, I wanted to show that knowledge has always survived and continued to be transmitted, even after the most traumatic events in human history, like the Armenian genocide. In fact, although this reflection is intended to be universal, the choice of books and stelas refers directly to my Armenian roots and the importance Armenian people attach to them through the repositories of ancient Armenian manuscripts (Matenadarans) and Armenian monuments. 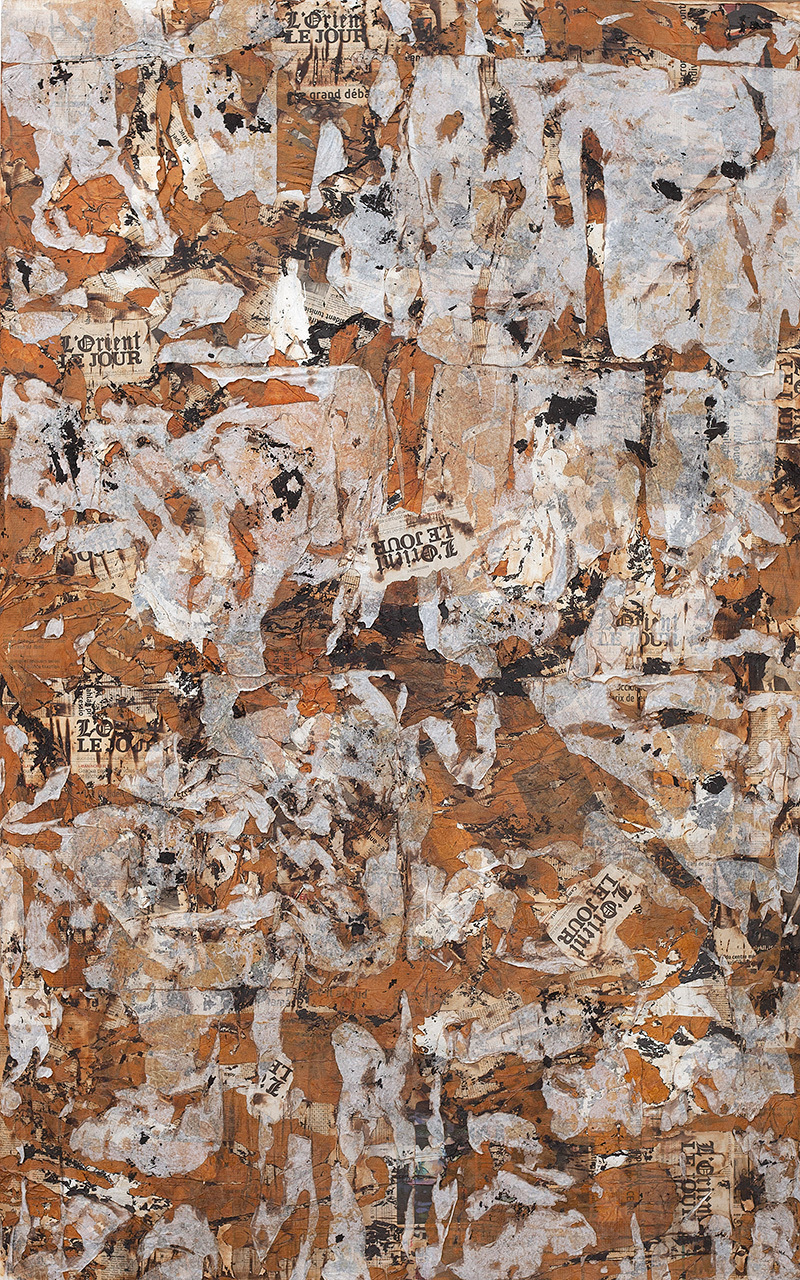 Do you see identity or a search for it as an ongoing theme in your work, given your varied background and time spent abroad?

Yes, it’s true that the idea of building through, or despite, the destruction made by the flame which is present in my work arguably has something to do with the way I had to rebuild my life abroad after civil war forced me into exile; and that is the theme of my upcoming exhibition in Beirut. I would thus say that there is a certain influence of my fragmented identity in my artwork, but although it is a central theme for me, I am more after the artistic idea. 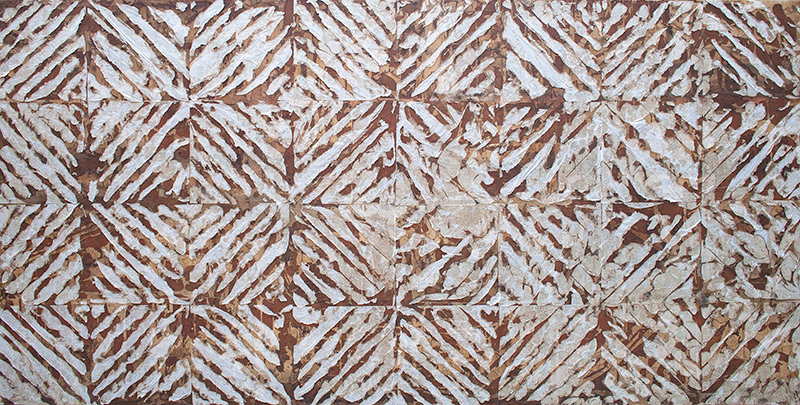 Your ‘Inextinguishable Flame’ work, shown at the 2017 Venice Biennale, became a huge talking point for its level of experimentation and creativity, remaining so today. What were you hoping to achieve from the project and were you surprised at the level of response it generated?

Venice Biennale fulfilled all my expectations and even surpassed them. It was the ultimate consecration of 30 years of work. The biennale also provided an incredible opportunity for me to present new works, like my installation Sorgente, and to show my art to a larger public in the Palazzo Zenobio, which is an amazing space. I was astonished by the number of visitors and the high volume of feedback I received. Moreover, as representative of the Armenian pavilion, it presented an occasion for me to honour my Armenian origins.

Beirut will be hosting a new exhibition of your work from September 18 to October 28. What can visitors look forward to seeing at this forthcoming show?

They will first see the last breath of an iconic building before its destruction and its rebirth. Then, as mentioned in its title, ‘Building with Fire’, the main theme of my exhibition is building through the destruction caused by fire. For this exhibition, we focused mainly on the idea of a geometry emanating from chaos, made by smoke and burnt matter. Visitors will thus see a selection of my most recent works, as well as some works that fall within what I presented at Venice last year. 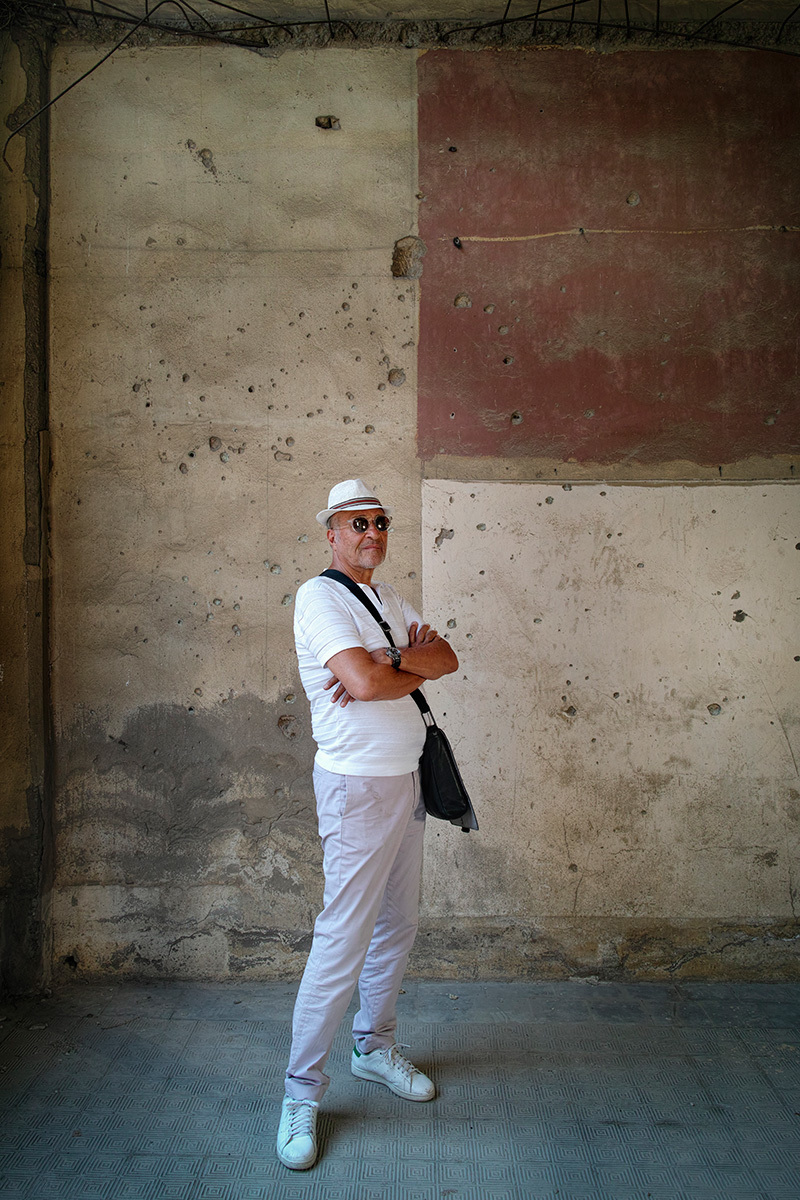 You selected an iconic building (L’Orient Le Jour) that was damaged during the civil war to house the Beirut show. Was your choice of venue significant and if so, what message are you looking to relay from this decision?

I chose the L’Orient Le Jour building because it resonates powerfully with my artworks, with its crumbling walls riddled with bullet holes and covered with messages of love and despair. It was the inspiration for the title of my exhibition ‘Building with Fire’, as it was shaped by the fire of 15 years of civil war, but has remained resilient right up until today. Although now on the eve of ruin, it will rise from the ashes, since its 19th-century façade will be preserved and should soon be listed as a UNESCO World Heritage Site. Hence, this building perfectly reflects the reality of Beirut as a city in a state of perpetual deconstruction and reconstruction, as well as the theme of the phoenix, which is developed in my art. 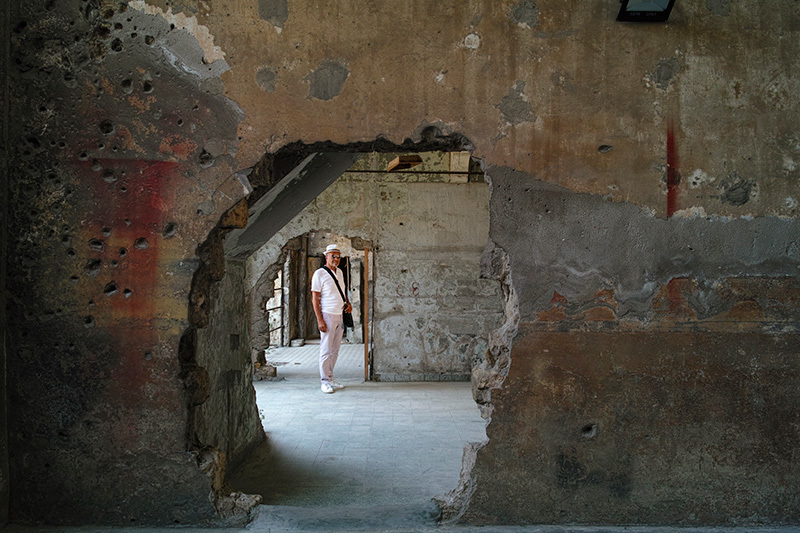 While some critics relate your work to the Zero-movement and Fluxus, it is generally accepted that your art doesn’t belong to any recognised movement or school. Are there any particular artists that have inspired or influenced you in your career?

First, Alberto Burri, for his experiments on burnt matter, especially on plastic. He tortured his plastics a lot and worked in the depth, however, while I'm personally less radical and work more on the surface of the canvas.
Second, J. M. W. Turner, for his research on atmospheric effects and his brilliant way of depicting natural elements like air, water and fire, notably in his series ‘The Burning of the Houses of Parliament’ (1834-35). I try to represent these mysterious vaporous atmospheres in my own way when I cover my paintings with smoke.
Third, I’d say Gerhard Richter for his technique with the squeegee, which I borrow to spread pigments, and Simon Hantaï for his pliage technique.
I study all the techniques of these great masters and treat them with my own unique language.

‘Building with Fire’ by Jean Boghossian will take place at L’Orient Le Jour from September 18 to October 28, 2018