A Treasure Trove of Texts

A Treasure Trove of Texts

Nada Shabout, one of the editors of the recently published compendium Modern Art in the Arab World: Primary Documents (2018), talks to Artscoops about the decade-long journey of putting together this landmark opus of writings on Modernism by 20th-century Arab intellectuals and artists, and what she hopes it will achieve

How did the idea for the Modern Art in the Arab World: Primary Documents evolve?

The concept for the book dates back to 2008, when one of my co-editors, Anneka Lenssen, was working on her Ph.D. at the Massachusetts Institute of Technology and reflected upon the sheer difficulties we all faced in locating primary documents such as artist statements and newspaper reviews. I happened to be teaching a class there as a visiting professor and that is where I met Anneka as one of my students. Anneka was also a member of the Association for Modern and Contemporary Art from the Arab World, Iran and Turkey (AMCA), which we had just started and of which I have been the founding president. In 2009, she proposed putting together a sourcebook of critical art writings by Arab intellectuals and artists from the 20th century translated into English and brought the idea to Sarah Rogers (AMCA president-elect) and me. We liked the idea and agreed to support the project. We began putting together a structure for the book and started the research process. Then, in 2011, the Museum of Modern Art (MoMA) approached us, having heard about the project, and offered to sponsor the publication. Given the museum’s International Programs’ existing, highly regarded Primary Documents publication series and the weight this ‘brand name’ would bring, we were delighted to have its support. 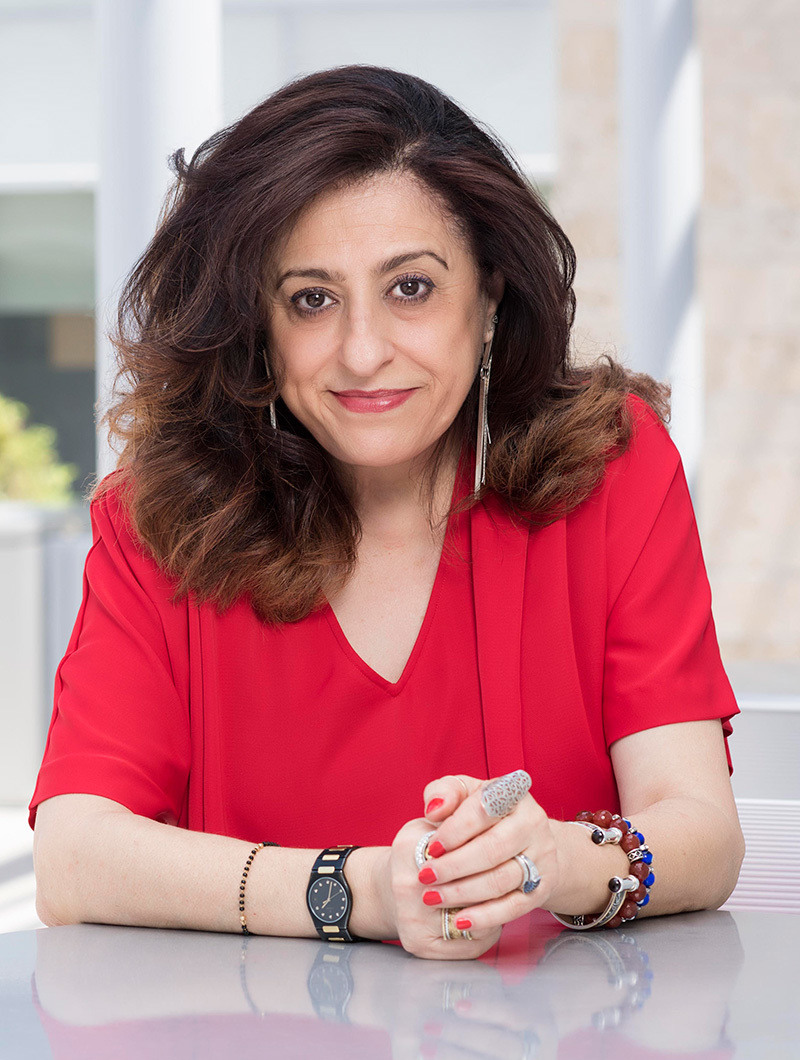 The publication has been years in the making. Why did it take so long to produce?

Partly due to the sheer volume of work involved, but also because of the decisions we faced of what to include. Our aim was to try to cover a broad range of texts significant to the key moments we identified in the region and that hadn’t necessarily made it into mainstream documentation before now. Although we wanted to be as inclusive as possible, we also had to accept that being exhaustive wasn’t an option.
We spent a great deal of time exploring how best to ensure the focus of the book remained on track, through organized workshops and consultations with individual experts, but the structure and shape of the book inevitably morphed over the years. The locations we covered alone extended from Beirut, Baghdad, Cairo and Marrakech to Khartoum and beyond. Even towards the time of publication, the number of documents featured crept up from 100 to 127. There were others we’d have liked to sneak in at the end, but we knew we had to stop somewhere! 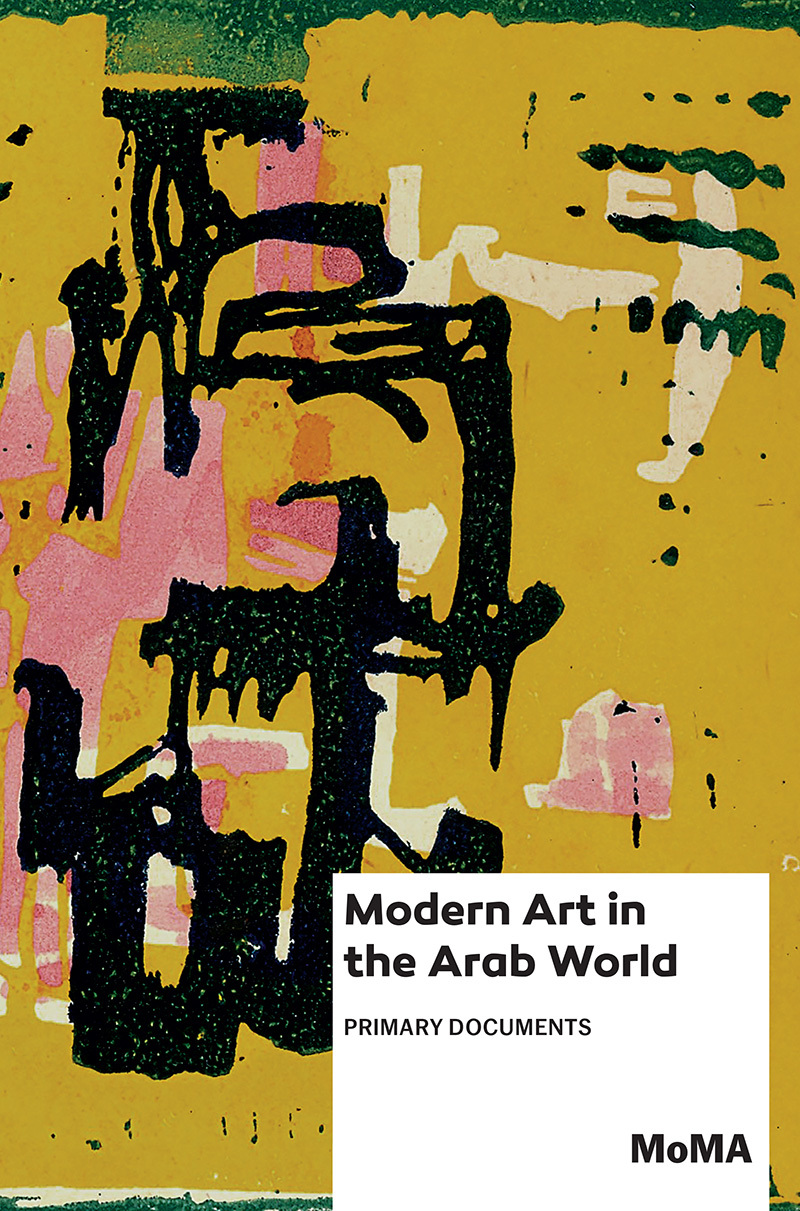 What were the biggest challenges in its production?

Working out copyright laws for different countries and locating the holders were major challenges.
However, translating was undoubtedly the biggest hurdle we faced; we were working on documents from several countries, which meant various Arabic dialects were in play, often laced with colloquialisms. We arranged the process to ensure there were several layers of review by us the editors, to ensure that the meaning of the texts was not changed through the various copy editing. There was a great deal that could very easily have gone wrong, but luckily, the editorial team – myself, Anneka and Sarah (Rogers) work well together. We all trusted each other’s work and areas of expertise, which was key to making the project a success. 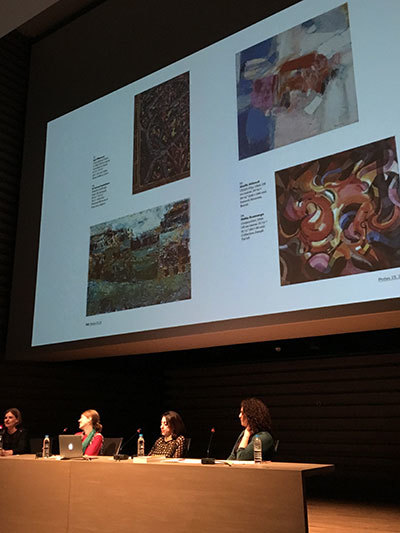 Panel discussion at the Sursock Museum, April 28, 2018, for the presentation of the book.
Capture on the board: reproductions of paintings, by Inji Efflatoun, Shafic Abboud, and Stelio Skamanga.
Photo courtesy of Stelio Skamanga

Which aspect of the publication did you find particularly satisfying?

Tracking down documents that had been mentioned by scholars, but never located in their original form was immensely satisfying. There were so many highlights like this; for example, the guest book comments from the 1932 exhibition of work by the Palestinian artist, Zulfa Al Saadi, are mentioned in several publications. We contacted everyone we knew that had referred to them to try to locate the original. It took several years of detective work to find some of these pages, but eventually, we succeeded.
We often made new discoveries by locating original texts, as was the case with the Crystalists’ manifesto in Khartoum. Once we located it in al-Ayyam newspaper, we found it was in fact a different, separate document than the one so widely referred to by scholars. 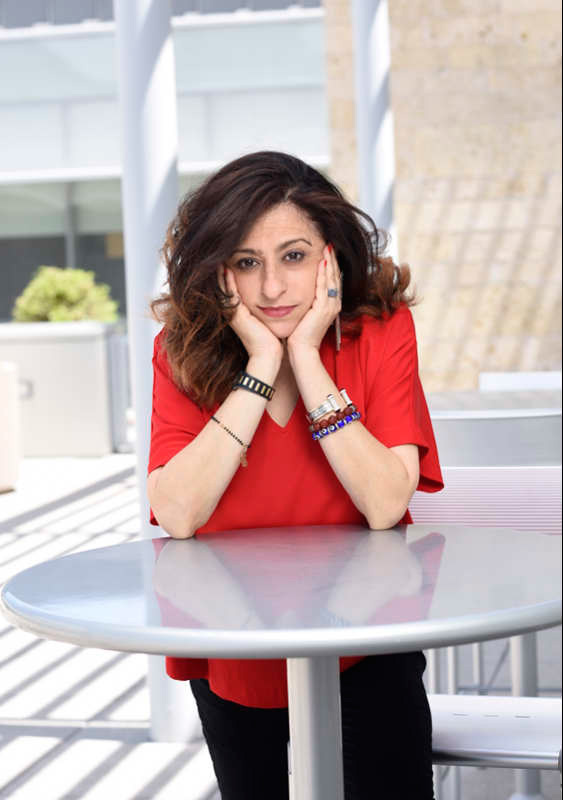 The publication is seen as filling an important void when it comes to English language resource for the study of Modernism in Arab art. What role do you see it fulfilling?

As professors, one of our main aims was to make important material available in English so that we could teach our courses. All three of us were having to provide research orally to our students, as the text wasn’t available or accessible in well-translated, written form.
We were also aware that the lack of documentation was limiting fields of study. Courses or topics tend to be ideologically positioned based on accessibility; for example, Egypt is a popular area of focus since a fair amount of material is available, but Yemen much less so.
We’re hoping that the book will pave the way for new and further research. Personally, I want it to represent an open door that people walk through and begin their own journeys, setting off in various directions, rather than stopping at it. I don’t want it to simply become a reference.
We’re also confident that the book will be of broader interest since it gives a voice to important figures of the 20th century world whose words have a bearing on other aspects of the times. Many assumptions were made in the past, based on very little information. This compilation allows for greater interpretation and provides valuable context which will, I’m sure, be of interest to curators, scholars, anthropologists, political scientists and others who are simply passionate art enthusiasts.