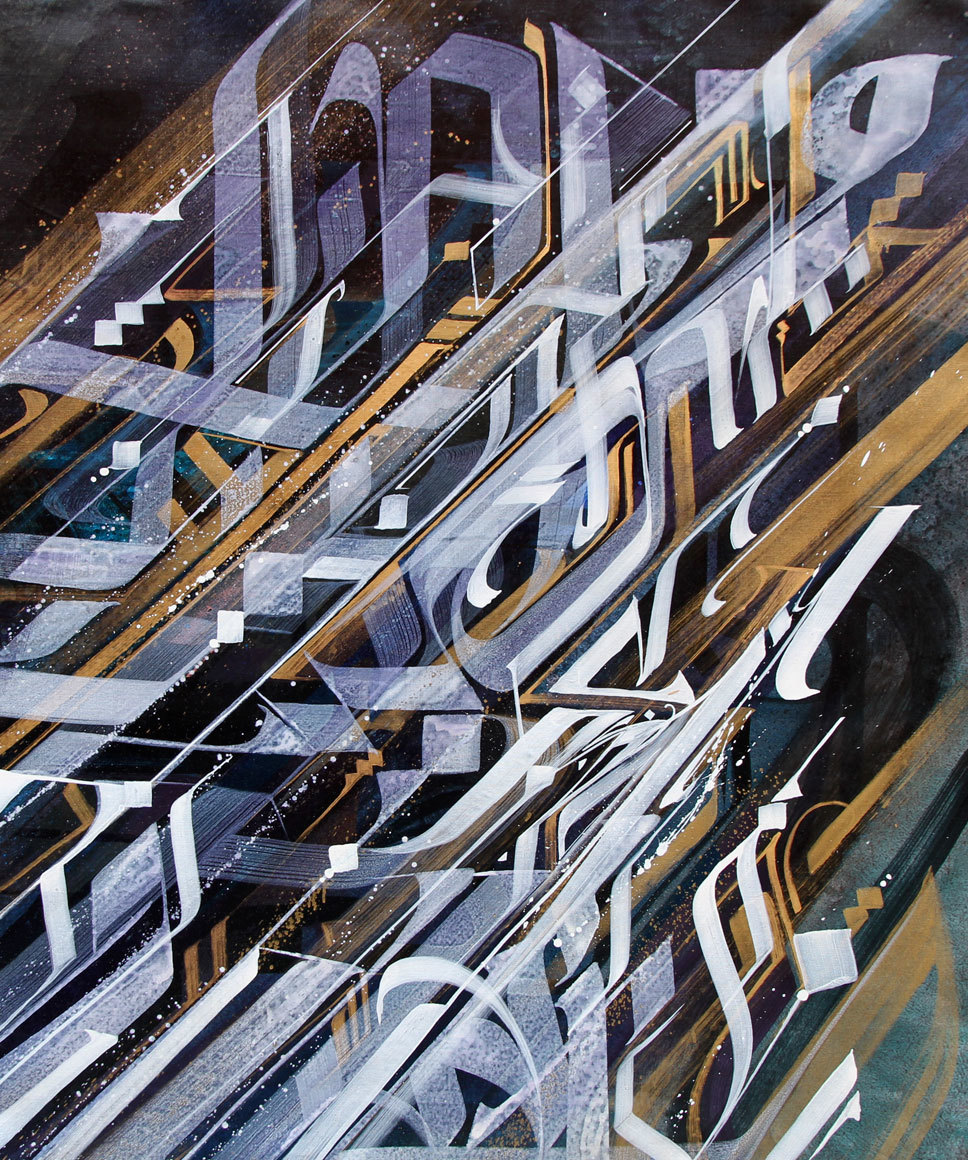 "“Crossing Paths – The Intersection of Memories” - Marrakech duo show with Carlos MARE - December 2015
There are no obvious condition concerns.
Marrakech
Ships in up to 14 business days.
We guarantee the authenticity and provenance of our artworks.

The letter as a foundation for an universalistic abstraction

« In a choreography showing a virtuoso-like ease, Vincent Abadie Hafez "Zepha" composes a ritual score that frees the letter from its semiotic restraint, thus keeping only the essence of a certain kind of aesthetics, the cultural bearing of a symbol. Interlacing characters of mixed origins give structure to a multiplicity of contrasts.

Formal logic and confusion in lines, instinctive pragmatism and gestures, the anchoring point is embodied in the movement, and the abstraction emerging from it. The whole unfolds a condensed rhythmics, galvanized by regular spaces, silent, and sometimes even unsuspected breathings, revealing a demanding and involving artwork. The gesture is technical, legatee of ancestral calligraphic practices and is being enriched by an urban context, contrasting and unexpected, so essential to the artist.

The city, an entity now used to plural artistic experimentations, offers a sometimes monumental staging to this writing of the perception. The scale effect honors one of the founding components of the creation process: the regularity of the gesture, the consistency of the character, converted into pictorial symbols placed at fixed intervals. Anchored within an ordinary environment, Zepha’s artworks take advantage of the resources inherent to this medium of expression, dear to him since he began, thanks to the spontaneous interactions that it causes.

If the writing keeps a trace, the urban implantation increases the ephemeral dimension. This secondary paradox is being exploited in parallel through the creation of palimpsests artworks, requiring the intervention of the spectator to unveil the artist’s creation by scratching off a layer of latex applied over it. Wear and tear, degradation, marks of time inflicted to the artwork are then echoing the artist’s primal practice, graffiti, though giving an implicit refection alluding the impact of Man on space and time and more widely, the part they are to play in the evolution of the interpersonal relations in our contemporary societies.As it creates an authentic dialog between preserving ancestral arts (traditional calligraphy, etching, marquetry), enhanced by a modern and popular approach, his endeavour makes sense when it spreads a transcivilizational legacy, breeding ground to the construction of a future where it is allowed to dream, to have faith in mankind and its ability to overcome divisions.

A nomadic artist, he finds recognition and respect in the eyes of the founders of urban calligraphy and takes part in must-be events of the international artistic scene.

The imbrication of arabic and latin characters writes the premises of a collective history, of a timeless language, of an abstraction to be interiorized. Our alphabets as disparate as they may be, hold a unifying significance, transcending the origins of each of us. To calligraph in order to unite, Zepha’s work is impregnated with his values, like an incantation to what is universal, a contemporary humanism induced by the power of the symbol, common foundation to civilizations, revealed by an art going beyond all frontiers, all alterity. »