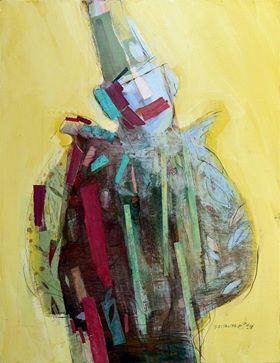 Tarek El Sheikh, born in 1969, is an Egyptian artist based in Cairo. A graduate of the Arts Education College of Helwan University, he received his B.A. in 1993. He has had multiple solo exhibitions, and been included in group exhibitions both locally and regionally. His work mainly focuses on the subject of the clown, a motif in Egyptian vernacular culture that represents society’s humorous individual who also encapsulates a spectrum of intense human emotion.

For El Sheikh, by subtly depicting various human expressions, the subject of the clown is a bell-weather of the human condition in Egypt. Represented as happy, morose or pensive, the clown serves as a representation of the effect of current social and political realities on the Egyptian people. El Sheikh has portrayed his clown in pencil, ink, and paint.

With each medium he uses, he develops different styles to represent different emotional conditions of the clown. We see the clown in mid-dance drawn in ink- jubilant and care-free; and we move towards sadness and glumness in the works that are painted with dark blues and greys. As El Sheikh moves more towards abstracting the physical outlines and features of the clown, the body becomes bigger and more heavy-set, as if physically manifesting the troubles that ail him by drawing him with his shoulders drooping.

Although El Sheikh oftentimes incorporates an extensive number of colors into his composition, he uses color to emphasize the emotional state of the subject. His close up focus on the subject, set dead center in the middle of each work, only serves to emphasize the expectation on the part of the artist for the viewer to engage not simply visually, but also emotionally by directly viewing the subject.