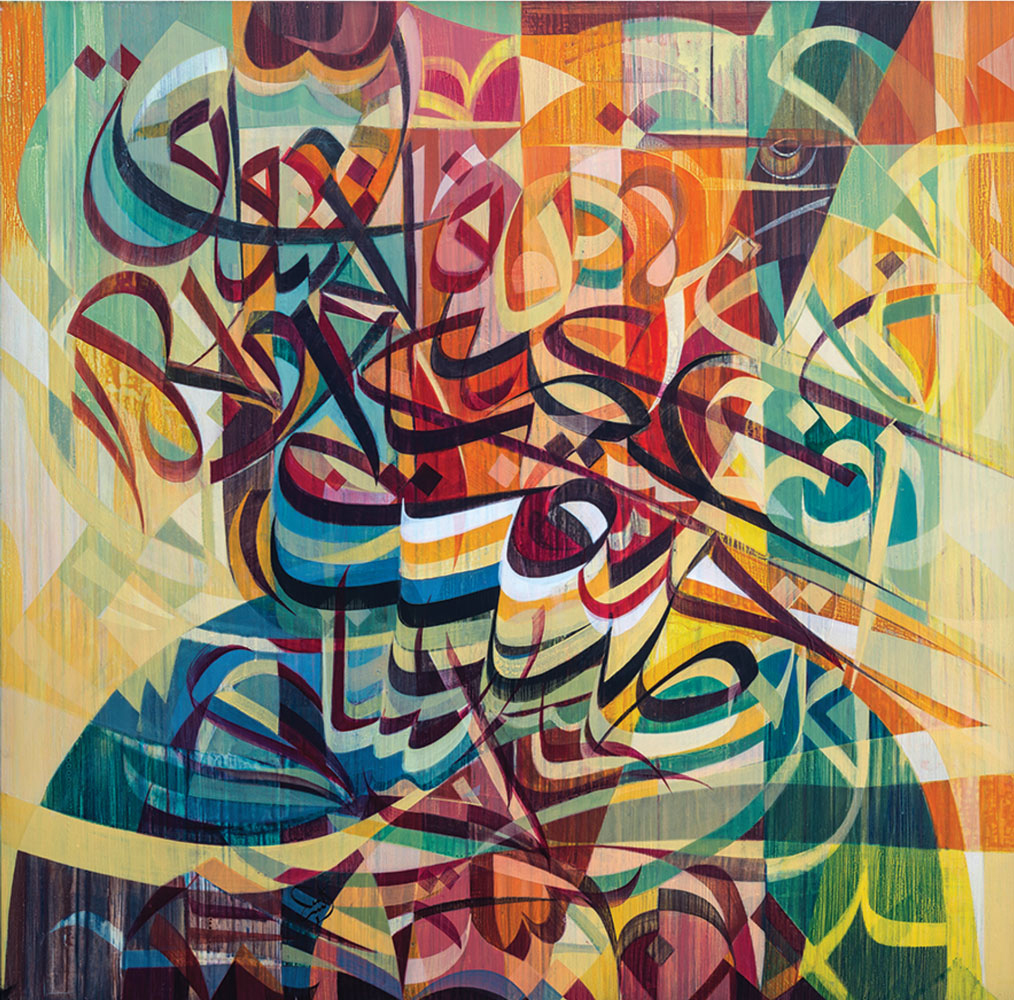 Tagelsir (Taj) Hassan SidAhmed, born in Sudan in 1954, and nicknamed as “Sheikh of Calligraphers” is today one of the most famous and skilled calligraphers in its traditional and contemporary forms. Taj has mastered mixing his skills in calligraphy, painting and graphic design in diverse rich artworks, of which a great majority of those were demonstrated in “Versatile Letters” held in Sharjah in November and December 2018.

Taj’s calligraphic beginnings were in the 1970s, firstly at the “khalwa” through the writing – by wooden reed – of the Holy Qur’an, and later in the middle and secondary school, upon which he was encouraged by his parents and teachers to refine his calligraphic skill and supplement it with higher academic studies. And that was he did, obtaining first a BA degree in Calligraphy and Arts from University of Khartoum for Art and Design in 1979, and later attaining a Master of Art in Graphic Design from the London College of Arts and Design, 1983. And while fulfilling these Academic demands (1977-1983), Taj was as well involved with the press and media in Sudan through calligraphic-ally designing and editing of “Al-Ayyam” newspaper.

After this period of study – one which did not end there, evident by Taj’s writings and renewed research papers in the Arabic calligraphy and in particular its typo – Taj moved to the UAE, and served his abilities, skills and experiences with Al-Bayan newspaper (1988-1989), the Ministry of Education (1990-2008), the Ministry of Youth And culture (2008-2014) and since 2015 with the Department of Culture and Information in Sharjah. In addition, he founded in 2000 “Hroof Arabiya” , the prominent magazine in Arabic calligraphy, and has ever been a key member on its editorial team since its foundation.

And over the past three decades, Taj had participated in major group exhibitions in MENA notably in UAE, Turkey and Egypt, gaining numerous top awards (17 in total) and many honorings (in Egypt, Kuwait, and UAE). As well, since 1989, Taj had held solo exhibitions in Dubai, Abu Dhabi and Sharjah, the latest of those was “Versatile Letters”. Taj artworks are currently on display in museums and government and cultural centers across Abu Dhabi, Dubai and Sharjah, and are also part of the collections of a number VIPs – in UAE and MENA – whom harbor an interest in Arabic Calligraphy and Islamic Arts.