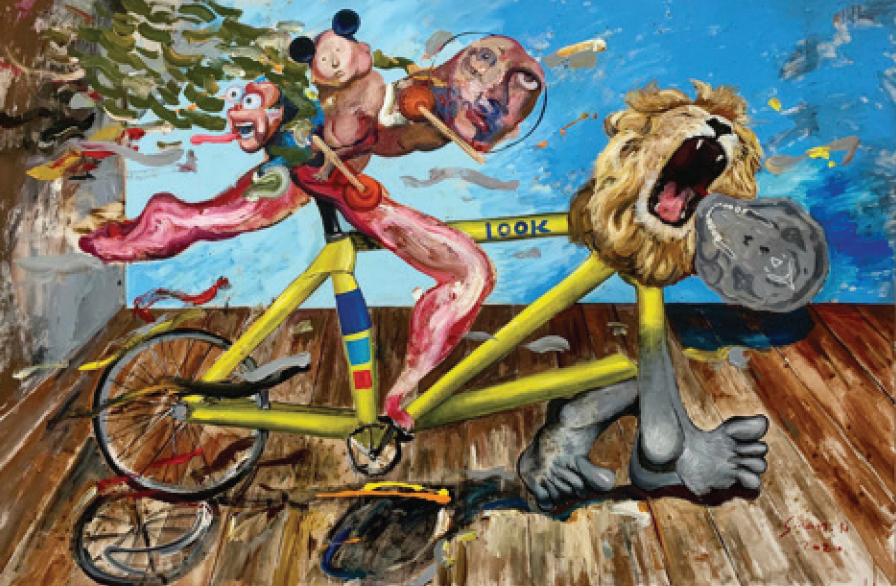 “... I dream that I was looking at my parents they were looking at their wedding picture. In my dream I was riding a bicycle with a fish over my head...”

Born in Irak in 1977, Sinan Hussain was already painting at 14. He graduated from the University of Fine Arts in Baghdad. After graduating, he was forced to flee to Jordan due to the war. From there, he later moved to Los Angeles.

Critics are reminded by Hieronymus Bosch, Magritte, or de Chirico when writing about his work.

His paintings, whether in acrylic or oil, are inspired by dreams, family, rituals and church iconography. These elements help him depict his own post or neo-surrealistic universe.

Sinan Hussain creates his unique characters, often caricatures, portrayed with big iconographic eyes, his own animal hybrids, circus clowns, harlequins or disguised actors surrounded by their own bizarre props such as traffic cones, each with their own symbolic meanings.

His enigmatic paintings use recurring allegorical elements to form a puzzle, a cryptic realm of curiosity, horror, joy and humour; all stemming from a deep inner truth.