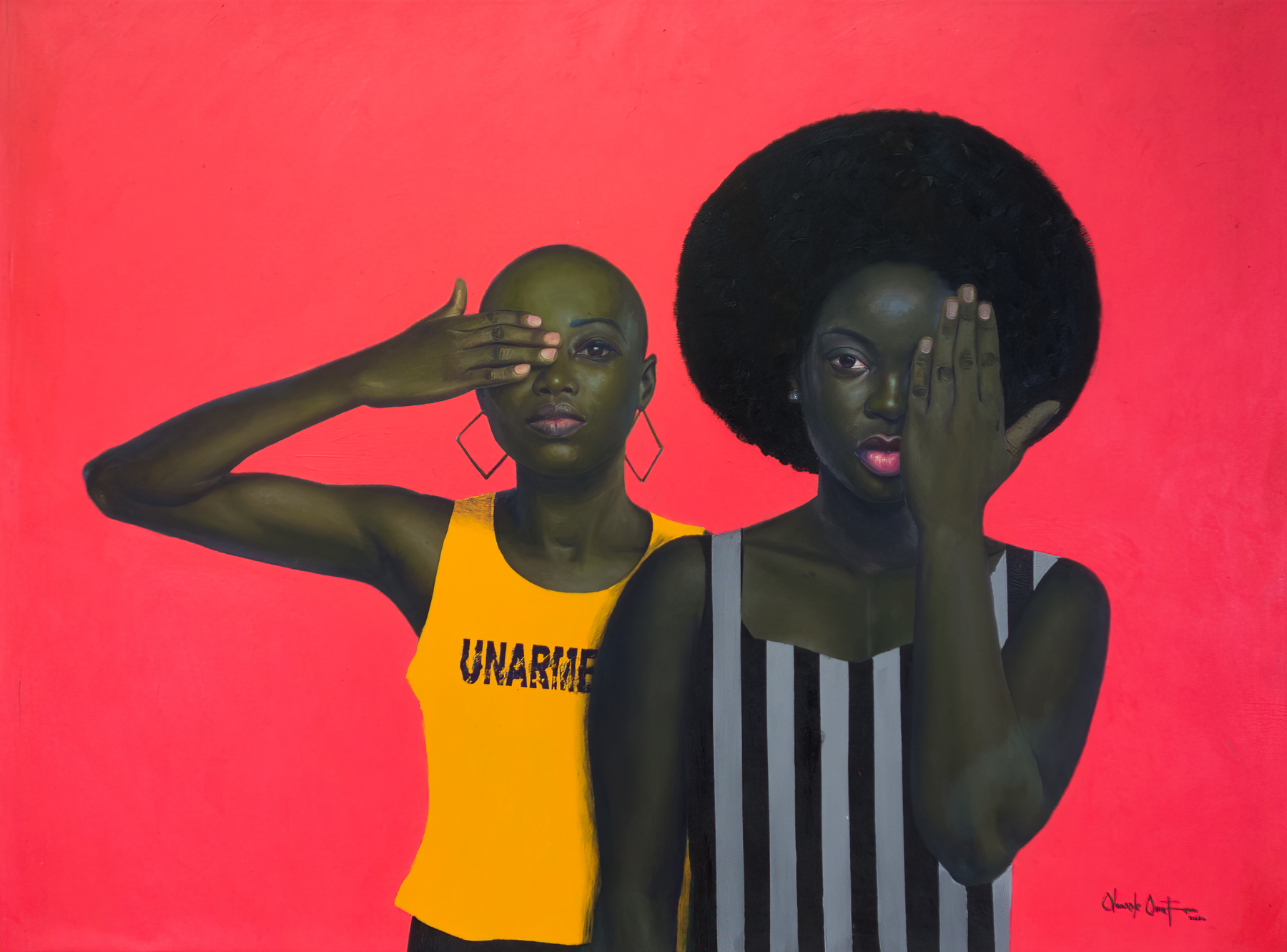 Directly from artist' studio
In perfect condition
OOA Gallery - Carrer Nou 1 - 08870 Sitges, Barcelona - Spain
Ships in up to 14 business days.
We guarantee the authenticity and provenance of our artworks.

Oluwole Omofemi’s work can best be described in his own words, ‘unapologetic’.

His muses; black women depicted with skin as dark and rich as the oil that serves as the lifeblood of the artist’s home country of Nigeria, are adorned with deep tribal marks, and crowned with engulfing halo-esque afros that are reminiscent of past martyrs of the black power movement that swept the global African diaspora in the late 1960’s right through to the early 1980’s.

Oluwole’s depiction of untamed manes, midnight hue skin, and deep, penetrating tribal marks is a rallying cry against what he views as the deterioration of the pride and self-esteem amongst his ‘black sisters’ today; both in Nigeria, and abroad, whom he believes have been most subjected by post-colonial indoctrination and pandering to Western society’s ideal of beauty and civilisation.

Raised predominantly in the company of his grandfather who shaped Oluwole’s worldview and greatly informed his understanding of his culture, and his appreciation for his heritage and identity; Oluwole was inspired by his grandfather’s period which nurtured the generation of Nigerians who fought for independence against colonial rule, and embraced the notion of self determination, and their Africanness.

Prevalent in his work are overtones of nostalgia and longing for what the artist suggests to be a golden age for the esteem,strength and beauty of black women. Conversely, Oluwole’s work infers that as time has proceeded, there has actually been a regression in the true liberty and emancipation of black women as far as their ability to embrace their most true and authentic versions of themselves, which is anchored in their Africanness, seen and felt viscerally through their skin tone and hair.

Moreover, Oluwole’s commentary on the suggested regression and plight of modern black women, and the need to reflect on and return to their former glory, has implications for the familial and relationship dynamic between black men and black women, and the topical subject of the decline of intermarriage, understanding and cohesion between the two.

Yet, despite what on face value could appear to be a bleak outlook, Oluwole’s overarching raison d’être and mission is to showcase afrocentric pride, which he maintains can only truly be championed through how black women, his muses, view themselves, and in turn are viewed by others.

For Oluwole, true liberty and emancipation for Africa, and black people at large, can only be achieved and realised once, black women are free to be their true selves and embraced and celebrated as they are.