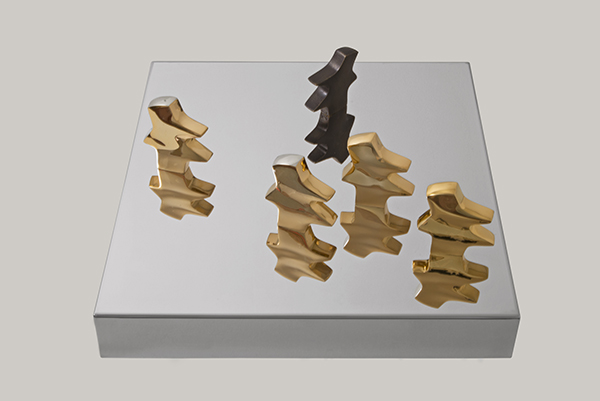 Nayla Romanos Iliya is a Lebanese architect and artist. Her numerous realizations in the field include projects of interior design, renovation, and architecture in Lebanon.

She left her home country during the civil war and moved to Paris, then lived in London, Hong Kong and Dubai. Nayla was exposed to different cultures, and, earlier on, developed a strong interest in art. She completed several sculpture workshops in 2011-2012, and has been sculpting on a full time basis ever since.

Influenced by her architectural practice, she approaches her sculptures as such, replacing function with intuition.

Driven by a constant quest for identity, Nayla took interest in the Phoenician civilization and more particularly in the Phoenician Alphabet, creating sculptures inspired by the letters’ shapes, meanings and symbolism. The last couple of years saw genesis of other bodies of work tackling different layers of identity and memory of the Lebanese civil war, as well as issues of sustainability, as can be seen in the “Tree of Life” and the “Flower Power” series. Her latest project is “On the Other Side of Time”, a permanent Public Art installation in Beirut, drawing inspiration from Dante’s “Divine Comedy”.

Her sculptures can be found in private as well as public collections, in Lebanon and abroad. Nayla currently lives and works in Beirut.