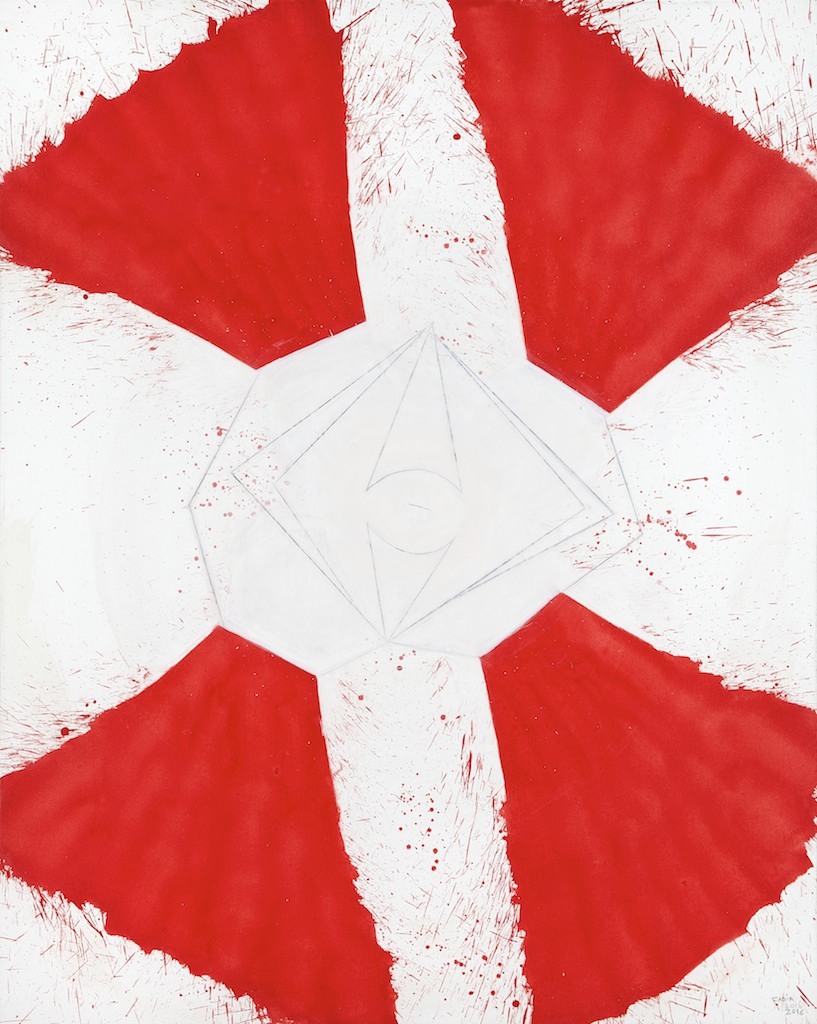 It is all the power and poetry of the primitive arts, including inspires the series of masks that resurface in his work. The compositions are most often vertical and complex in their realization. The lines and the colors mix to compose drawings always different and of figurative inspiration where everything is symbol in a series which could go to infinity and where the artist gives free rein to his instinct and his imagination. Totems, Birds, Masks, three subjects that Fadia works endlessly. The totems have disappeared over time giving way to birds, then to masks. The artist's interest in primitive arts was not conscious when she started her work. At first, its totems were dislocated, fragmented in space, then gradually, they took shape. This theme dominated his work for six years, but already the bird appeared introducing new forms round, pointed, in flight, posed ... The colors that Fadia Haddad handles with a master hand capture the gaze and take possession of the viewer. . These masks hide nothing, they are forms that inhabit us, they do not hide, they reveal to us. If certain motifs evoke figures sculpted in Africa, it is because, in contact with such and such an object, Fadia radicalizes her aspiration to a certain idea of purity. Fadia's masks are like the rest of her work, they reflect and give off energy. Fadia is in perpetual motion. It is this energy that gives both balance and diversity to his creativity. It is through the Taoist philosophy that the artist was able to reach a mental and physical state where she is both inside and outside of her work. She always meditates before starting to paint to strive for this perfection. His way of working is unusual. She works flat on the floor and on several paintings at the same time, she spreads 3 large paintings, or 20 pieces of paper and moves from one to the other. Hence his freedom in movement and color. She moves like a dancer between her works. It obtains unprecedented evaporation effects, nothing or almost nothing flows. Everything where almost evaporates.

Fadia Haddad was born in Lebanon in 1959. She graduated from the Académie Libanaise des Beaux-Arts (ALBA) in 1984 and obtained a diploma in Fine Arts from the Ecole Nationale Supérieure des Beaux-Arts (ENSBA) in Paris in 1988. She lives and works in Paris.

She has also notably participated in group exhibitions at the Institut du Monde Arabe (1991,2008, 2017), and Fondation Paul Ricard (1995). Her work is regularly featured in art fairs such as Art Paris, Art Brussels, Art Miami, Art Dubai, Abu Dhabi Art, and FIAC. Her work is in part of foundations such as Barjeel Art Foundation, Institut du Monde Arabe, Sursock museum and private collections. Fadia Haddad is represented by Agial Art Gallery in Beirut and Galerie Michel Rein in Paris/ Bruxelles