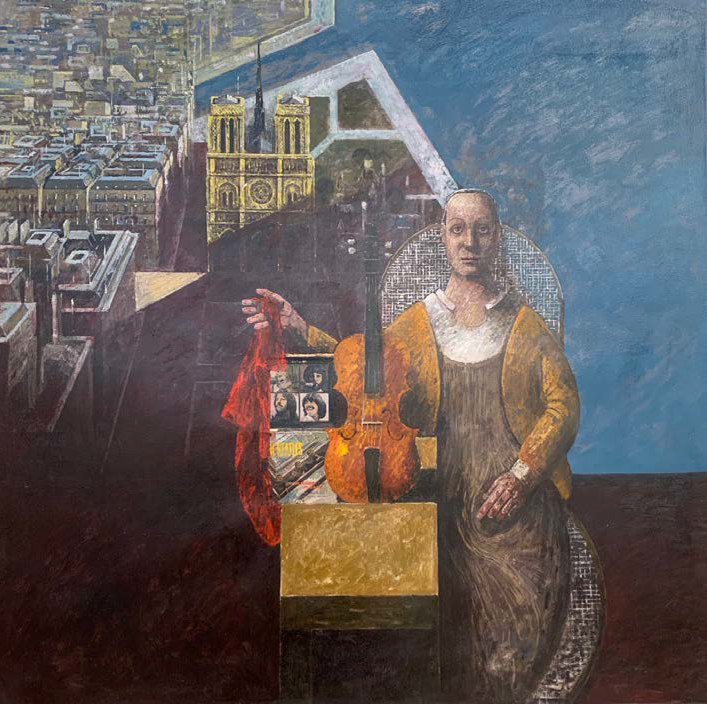 Emilio Trad was born in 1953, in Buenos Aires. After he graduated from the school of Fine Arts, he left Argentina and traveled through Europe, in order to complete his artistic culture in all the important museums. In 1982, he decided to settle in Paris, where he still lives for the time being.

To the critic Samantha Deman: “The artist uses his intelligence and his masterly skill to express his interior world full of prophecies, haunted by hieratic characters. No trace of aggressiveness in these impassive and fixed gazes who examine you with intensity.”(Cimaise December 2008) The Lebanese critic, Joseph Tarrab, wrote: “Emilio Trad seems to set up a platonic idealism where the perceptive world is the reflection of the intelligible world”. (L’Orient le jour, 8 février 2000)

In the recent book she wrote about Emilio Trad (Snoeck Publishers, 2008), Françoise Monnin notices: ”Whether he applies fading tints or imagine subtle vibrations, his palette proves to be infinitely varied, and particularly rich in halftones. (…) Colour is applied in a delicate manner, by a brush that flutters around until the limits of the shapes, as well as the surface of the tones, vibrate, and sing.”
If Emilio Trad, by his great skill of drawing and color, is considered by many as a classical painter, if it is true that his work is based on a long pictorial tradition, he demonstrates with each new picture that he is a painter who moves with the times.

The artistic approach of this tireless worker is in constant evolution, always in search of a better and novel visual expression. For instance, in the latest canvases, the painter uses backgrounds of newspapers or fragments of texts that he masterfully integrates into his compositions.