When the savagery of war became startlingly clear, Omran Younis began including the horrible reality around him in his work. He explains: "When art becomes a protest… In this human slaughterhouse, a protest against the pain, the invisible, the human moment of fear and death that develops into screams on this white cloth until it becomes painful and the black painted lines penetrate the body of the earth like a plough to make art a clear line of certainty… Its price is only life itself.”

Born in Hassakah, Omran Younis (1971) received both his Bachelor’s and Master’s degree from the Department of Painting, Faculty of Fine Arts, Damascus University. With an intensity characteristic of his work, Younes clearly expresses Syrian suffering. Filled with horrific scenes of corpses and coffins, dismemberment, fear and panic, his work traces the symbols and the inhumanity of the war, in a way that evokes heart wrenching emotions.

Omran Younis has been featured in exhibitions throughout the Middle East and in the US at art spaces such as Ayyam Gallery, Beirut; Zara Gallery, Amman and Virginia Common Wealth University Gallery, Doha. 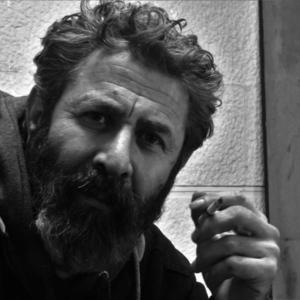