Only muted pigments cover Reem Yassouf's recent canvases. She says: “Unlike my last exhibition, I did not use aggressive colours, but those of the earth because it is from there that man came from and it is to this earth that he returns.”

Born in Damascus (1979), Reem Yassouf graduated from the Faculty of Fine Arts in Damascus. She works in numerous media to create multilayered works that reflect the psychological complexity which she explores through her work. After the start of the Syrian revolution, Yassouf’s art focused on the trauma that children have incurred from the war. Usually featuring silhouetted figures, buildings and animals, her works are composed of geometric forms and have many symbolic elements, such as flying kites and birds.

Reem Yassouf has participated in several individual and group exhibitions in Syria, Jordan, Lebanon, England, France, Italy, Netherlands, Germany, the UAE, Qatar, Kuwait, Andorra and the US. She obtained an honorary prize in visual arts from the Center for World Creativity in 2010. 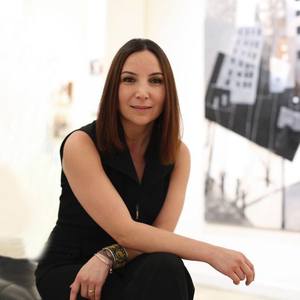