David Thuku was born in Nakuru in 1985. Thanks to his outstanding skills which were discovered early on, he received a grant from the Langalanga Scholarship Fund and graduated from the Institute of Fine Arts in Nairobi Buru Buru at the age of 24.

Since graduating, THUKU has been living and working in Nairobi. In 2013 he co-founded the Brush-Tu Art Studio (www.brushtu.co.ke), a creative art collective that provides artists with workspaces allowing for collaborative exchanges. This young painter continued his successful journey, scattering his works throughout the vast world. After exhibiting in his own country, THUKU was accepted to the most prestigious fairs and exhibitions dedicated to contemporary African art in cities throughout Europe. THUKU’s works have been welcomed in 1:54 in London, AKAA and the Contemporary Drawing Fair in Paris and most recently in Barcelona at the Out of Africa art gallery.

After having worked in a rather classical way with oil on canvas, the painter gradually turned to paper showing a predilection for it. As he explains, he cuts and tears the paper carefully discovering overlapping images and revealing hidden knowledge. Through the analysis of the everyday space we occupy, THUKU goes further and further into the layers to reveal hidden dimensions of the work and of the undertaking that it’s meant to decipher.

THUKU admits to using repeated motifs to mark his spacial environment and its characteristics. The motif has a special meaning in his works; it creates a sense of space, of perspective and comparison and continuity.

The choice to unify the motif is particularly visible in the series that he presents and aptly baptized "Empty seats”.

Beyond the motif, we are in the same palette of colors and only the presence of characters in unusual positions break, in a certain way, the unity of the works without causing the slightest rupture. Empty seats, because the characters are next to, below or above, but never on them. To this is added the motif of the dice, the object of the game, no doubt, but also a subtle reference to chance and all its injustices.

The work is very graphic, leaving little room for anecdote and returns the viewer to their own projections: why a cage instead of a head on a character with clothes in the form of prison bars that we imagine with his hands tied behind his back? Is it a symbol of confinement of the body and soul?

A checkerboard spontaneously embodies the binary opposition of black and white, but also of good and evil, women and men, the no and the yes! Another perspective...and what can we say about this body of which we only see the lower part on a chair stretched on the floor. Is it perhaps the modest vision of a hanged man who, with one last kick, knocked over the chair that held him? The artist also does not give us answers, giving free rein to our imagination and our own reflections, the many meanings of the work, mirrors of the soul that are thus presented to us. Why are these seats empty, deprived of their essential function, which is to allow us to rest our aching bodies and give them a place, a rest and a seat? It is true that most seem suspended in the void by incomprehensible strings that bind them to something else, to another world, outside the box... Empty or white spheres punctuate the space like so many eyes, but also so many bullets and threats that come from I do not know where, adding additional discomfort. Thus, from a very graphic work, made of large blocks of colors to a very small palette (black, red and white essentially) on torn paper, the artist pushes us towards unsettling introspection and creates a real uneasiness that haunts us without a word and without giving us any answers. 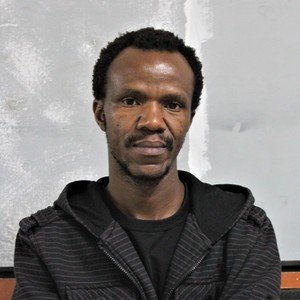