Dodi Tabbaa, who, keeping up with times and using technology, rendered her works into modern art, these paper prints “reference digital pixels, LED lighting and high-definition effects” to encapsulate energy and colour, warmth and geometry, more familiar landscapes – if straining the eye and looking at them from afar – and “glow with almost neon shades of energy and enhanced colour lifting up each square, giving each an individual burst of an aura-like beam”. A modern take on her previous “stills” of iconic characters, the present images are pared down to a minimum, often offering just the pixelated colours, side by side or overlapping, influenced, by the artist’s admission, by Japanese video games, “especially from the artist Keiji Inafune”, but also by “the classic colour theorists and pop and minimalist artists of the 20th century, such as Josef Albers, Dan Flavin or Victor Vasarely”.

In 1982, in Helsinki, Finland, she attended a course on art gallery management. 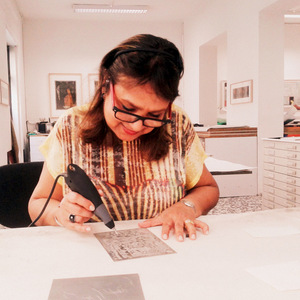