Born in Lebanon in 1957, Srouji lives and works between Beirut and Paris. He holds a master’s degree in Fine Arts from Concordia University in Canada (1987). He had held different teaching positions at universities in the United States, and Canada and was teaching at the Sorbonne, in Paris, before joining the Lebanese American University in 2010; where he holds, today, the position of Chairperson of the Art & Design Department, as Associate Professor of Practice.
He has held numerous solo exhibitions at Galerie Janine Rubeiz: “Particules” (1997), “Transformations” (2000), “Sous le signe de la légèreté” (2003), “Touches” (2006), “Offrandes” (2009), “Tête dans les Nuages” (2016), and “Let Us Dream” (2018), in addition to taking part in several group shows across the years. He also showed “Into the clouds” at the Singapore Art Fair and “The MAC International” first open art prize in Belfast, Ireland, in 2014. He was featured at the “Abu-Dhabi Art” and “Art14 London.” His work has been acquired by prominent public and private collections, such as the “Alcan Collection” in Canada, the “Carmignac Foundation” and the “Institut du Monde Arabe” in France. 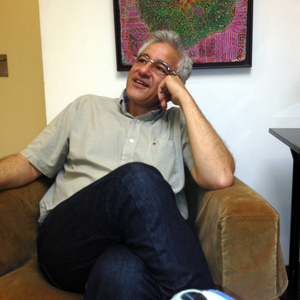