Laila Shawa was born in Gaza in 1940. She graduated summa cum laude in Fine Arts from the Italian Accademia di Belle Arti in 1964 and received a diploma in Plastic Arts from the Accademia San Giacomo in Rome. She returned to Gaza between 1965 and 1967 to teach arts and crafts to underprivileged children. She now lives and works in London. As a Palestinian artist, Shawa’s concern is to reflect the political realities of her country. Her work is based on a heightened sense of realism and targets injustice and persecution wherever their roots may be. The initial motivation for a piece often comes from her photographs, which are later transformed by means of silkscreen printing techniques. The written word is often present, as in the acclaimed Walls of Gaza series (1994), which focused on the heart-rending messages of hope and resistance spray-painted, in defiance of Israeli censorship, by the ordinary people of Gaza upon the walls of their city. 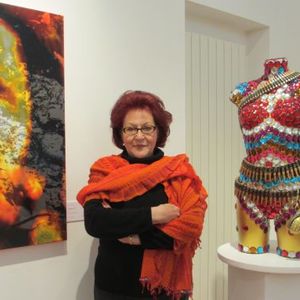