"Juliana Seraphim was born in Jaffa in 1934, and was among one of the first waves of displaced Palestinian refugees to move to Beirut, Lebanon in 1952. She was 14 when her family fled first to Sidon by boat in 1949, it was after their move to Beirut that she then worked in refugee relief while attending art classes. It was in Beirut that Seraphim produced her most notable works and developed her personal style. After studying at the Lebanese Fine Arts Academy as well as privately with other local contemporary artists, she began to show her work in solo exhibitions and gained recognition within Beirut. She privately studied with Lebanese painter Jean Khalifeh (1923-78) and her first exhibitions took place in his studio. She then went on to internationally represent Lebanon in three biennials - Alexandria (1962), Paris (1963), and Sao Paolo (1965). Whereas her Lebanese contemporaries tend to take on a figurative style in order to demonstrate the central issues of the Palestinian struggle, Seraphim’s visual language is often characterized as having complex layers of overlapping lines and improvisational dream-like imagery.

When asked, Seraphim cites the source of her surrealist imagery as memories of her childhood. She drew specific inspiration from the faded frescoes of winged beings on the ceiling of her grandfather's home, and former convent, in Jerusalem. In this way, Seraphim cultivates a shifting reality of infinite depth and creation. Her dream-like imagery also implies the unsteady nature of a long-held memory of a cherished place - and in doing so she transcribes her political concerns regarding her home through the lens of personal and surreal imagery while also encouraging the viewer to actively participate with the imagery presented." 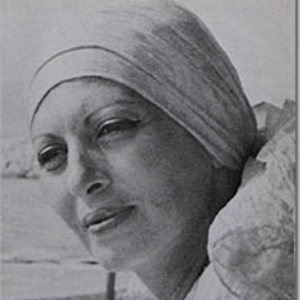