Mona Saudi was a Jordanian artist and sculptor (1945-2022). Saudi created her first sculpture in stone in 1965 and has never looked back. Stone remains her love, be it Carrara white marble, pink limestone or green marble from Jordan, or Syrian black diorite. Saudi’s work starts from respect for her material, before she manipulates it, creating powerful and timeless modern and abstract works. Saudi’s works have been shown in solo and collective exhibitions worldwide and in museums. These include the Barjeel Foundation in Sharjah, the National Gallery of the Fine Arts in Amman, the National Museum for Women in the Arts in Washington DC, and the British Museum in London. 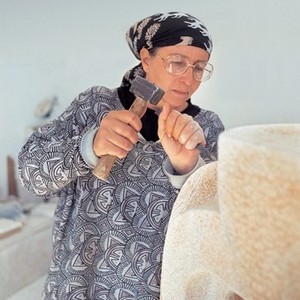