Lives in Syria
Attached to the earth of Syria, artist Nizar Sabour uses natural materials to create his paintings. “I was very marked by my childhood memories,” he explains. “They are all linked to the earth. I often went for a walk in the forest. I remember the smell of burnt wood from the barbecue. My visual and taste memory wakes up in this way.”
Born in Latakia, Nizar Sabour (1958) graduated from the Fine Arts Faculty, Damascus University, and obtained a PhD in Art Philosophy from the Strugunov Academy of Industrial & Applied Arts, Moscow, Russia. Influenced by the gamut of ancient history to present day realities of the region, Sabour’s cityscapes and narrative scenes often appear archaic, like old manuscripts. His minimal palette is created in part from the natural materials that he makes himself and utilises as paint – including burnt olive pits to make a black pigment – giving a tactile experience to his work.
Nizar Sabour’s work is in public and private collections all over the world including the National Museum and the People's Palace, Damascus; National Museum of Jordan; Museum of Bahrain; Sharjah Museum and the Museum of Eastern Peoples Arts, Moscow. 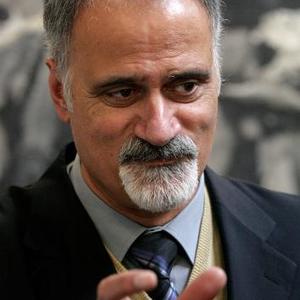