Born in France, Karine Roche has worked in the UAE since 2009. She spent her childhood in Africa, South America and Asia before starting her studies in Paris where she obtained a diploma in arts and design (ENSAAMA Olivier De Serres). Her works have been showcased in Museums and galleries and are in private and corporate collections (Municipality of Vitry-Sur-Seine, Foundation Colas, West lake Museum (Hangzhou), Aventure des toiles, GL event…). The concept of 'City vs Nature' highlights the broader question  of the vision of the future and the search for a better fit between our lifestyles and the environment. The latter would certainly help resolve ecological and social crises. Here painting creates a cosmology in which nature returns to the city centre. These paintings become visual memories of places crossed. The graphic lines and shapes merge disappear and resurface. The foreground of the image reveal backgrounds which are superimposed. Like the meandering of a thought that does not show events in a linear way but as a set of impressions, like a memory. 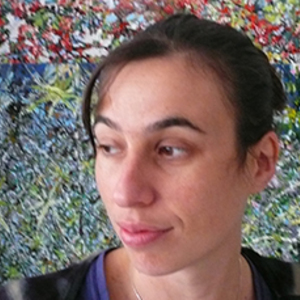