Mohamed Rabie was born in the beautiful southern city of Minya in 1986. He graduated from the Faculty of Fine Art in Cairo's painting department and is a member of the Fine Artists Association and the General Federation of Arab Archaeologists.

In 2011, he won an incentive award from the University of Helwan, followed by a full-time grant from the Ministry of Culture. His artwork is part of private collections in Egypt and Dubai, and a permanent collection at the General Authority for Cultural Palaces. He also participated in different international exhibitions, including the Beijing Biennial in China, Dubai and Kenya. He held four solo art exhibitions in different galleries in cairo. His paintings have been exhibited in over 15 group shows in Egypt, including the Bibliotheca Alexandria, Cairo Opera House and the Museum of Modern Art, among others. Rabie's artwork is deeply rooted in his hometown's heritage and identity. It is a very layered blend of the different eras and cultures that constitute the rich heritage of the south. He constantly extracts concepts and themes from Egyptian heritage, translating them into a contemporary visual. The simplicity of these visuals makes the viewer immediately connect with the characters depicted in his paintings. 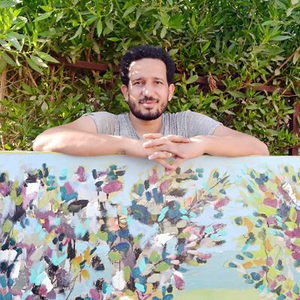