Bahman Panahi is a visual artist, calligrapher and musician based in Paris.  He was born in Iran in 1967 and grew up surrounded by the rich culture of the Persian artistic traditions.  He was drawn to the arts of calligraphy and music from an early age and soon found that his practice of these two art forms complemented each other.

In calligraphy he studied under the direction of the respected masters Gholamhosein Amirkhani, Abdollah Foradi and Yadollah Kaboli.  In music he studied with the masters Hushang Zarif, Athaullah Zahed Shirazi and Mohammad Reza Lotfi.  He graduated from the Faculty of Fine Arts in Tehran University and continued in Ecole Beaux-arts de Valenciennes and his doctoral research (the relationship between music and calligraphy) at the Sorbonne University in France.

Bahman Panahi has coined the term “musicalligraphy” to describe his work.  A combination of visual abstraction, calligraphy, and music, his pieces are an exploration of the points where these three arts intersect.

Bahman Panahi has actively participated in calligraphic exhibitions, festivals, lectures, and music concerts in five continents. He has been invited as a visiting professor and Distinguished Artist to noted universities such as Harvard and North Eastern, U.S.A., and currently teaches calligraphy in different institutions in Paris. 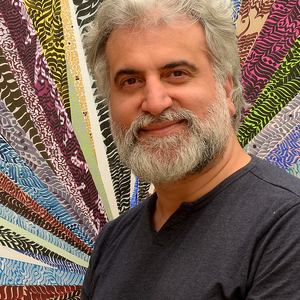