He flew under the colors of the Trans-Mediterranean Airways (TMA) for over three decades before hanging his uniform & pursuing his passion for painting. Specializing in Abstract Art, Abdelmawla takes to his canvases to reimagine some of the spectacular sights his cockpit overlooked during his time in the air. Growing up, Abdelmawla dreamed of flying & idolized a Lebanese pilot who flew for the U.S. Air Force. He received his Commercial Pilot License (CPL) in 1956 & went on to fly for the Trans-Mediterranean Airways for 33 years. In 1985, he became Vice President of Flight Operations at the TMA, before leaving the airline industry altogether in 1990 to chase his other passion: Painting. In 1995, Abdelmawla attended the Art Students’ League of New York in Manhattan, where he refined his artistic talents & honed his painting skills &techniques. His first solo exhibition came shortly after he came back to Beirut, curated by the Lebanese Artists Association – Sculptors & Painters (LAAPS). Abdelmawla has since been in numerous solo & group exhibitions, in Lebanon & abroad, headlining such venues as the Sursock Museum, Gebran Khalil Gebran Museum, Piece Unique Gallery, Exode Gallery, & the UNESCO Palace. He also participated in several local art festivals & events hosted by the likes of the American University of Beirut (AUB), the Beirut Arab university (BAU), the Makhzoumi Foundation, & the LAAPS. In 2005, Abdelmawla became a member on the board of the LAAPS & served until 2016. Today, 85 years young, Abdelmawla spends most of his afternoons facing a canvas with a brush in his hand. Both his palette & his collection grow richer by the day as he continues to feed his ever-present passion. 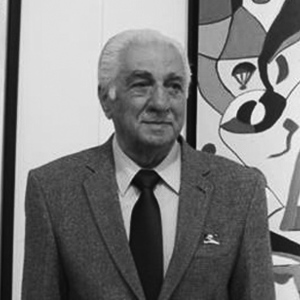