Athier Mousawi (b.1982) is a British Iraqi visual artist whose work over recent years has centred on posing unanswerable questions against undefined answers and forming a visual narrative between the two.

Since graduating from Central St. Martins, London in 2007, the subject of much of his work has been Iraq and his diasporic relationship to his intrinsic yet foreign homeland. Of the main constructs used within Athier’s paintings the initial response is that of scale and colour which guide the viewer through his compositions. Symbolism in these large scale paintings are weaved through layers of organic figurative and geometric Islamic forms. Large shapes frame moments of detail, acting like windows into another, very personal place, which the viewer is invited into.

Although predominantly a painter, his more graphic drawing style uses similar devices of surrounding intense narrative with rigid forms.
Athier is currently based in Paris. 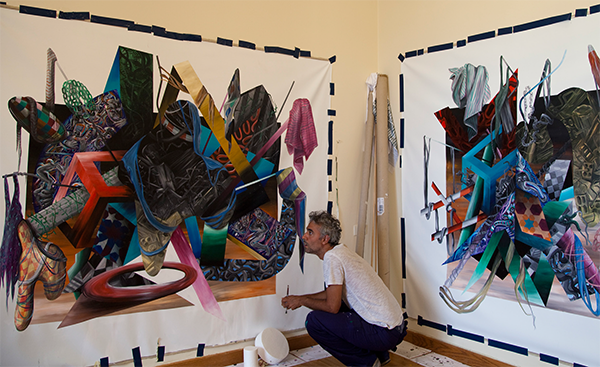