Born in Qamishli, Syria, Mourad now lives and works in New York City. He received his Master of Fine Arts from the Yerevan Institute of Fine Arts in Armenia. Mourad has been a resident teaching artist at Brandeis University, Harvard University, and Holy Cross (Worcester). He is the only visual artist member in Yo-Yo Ma’s Silk Road Ensemble and is featured in the film “Music of Strangers” (2016). Mourad employs his technique of live drawing and animation in concert with musicians – developing a collaboration in which art and music harmonize with one another. Recent commissions include Israel in Egypt, for the Los Angeles Master Chorale, Sound of Stone to accompany the exhibition “Armenia!” for the Metropolitan Museum of Art and Well Wish Ya, a dance performance piece with the OYO Dance Troupe in Namibia. His performance, Home Within, co-produced with clarinetist Kinan Azmeh, has toured the world. The 2016 recipient of the Robert Bosch Stiftung Film Prize, his animated film 4 Acts for Syria made its 2019 premiere at the Stuttgart Animation Festival. He was recently asked by the Aga Khan Foundation to create a site-specific 20-foot drawing-sculpture called Seeing Through Babel, at London’s Ismaili Center, addressing the importance of diversity in our contemporary times. 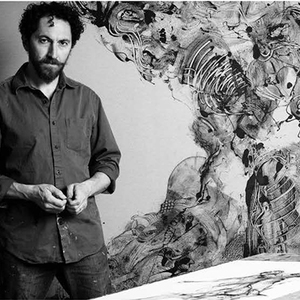