A native of Luxembourg, Rabbath moved to Lebanon over two decades ago, having graduated in Fine Arts. Today, she has an atelier in Beirut and a decade of critically acclaimed exhibitions to her name. Rabbath developed her technique and creative vision with the support of prominent Lebanese artists, including at the Paul Guiragossian School and with Tania Bakalian Safieddine, who introduced her to collage, which she has since adopted as her preferred method of expression. Bright, colourful and creative, her work involves cutting out tiny bits of dreams and emotions, which are rolled, folded and made into triangles, before being transformed into original collages with calligraphy-embellished Damascus paper. The repetition of the same motif with varying scales references an energy outburst guided by her colour choice as the artist often imagines a universe with erupting planets in orbit. 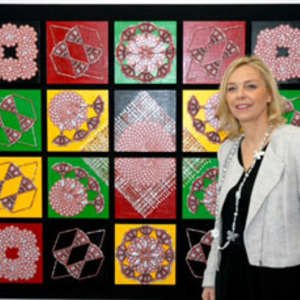