Born in 1987, living and working in his native Kenya, Onyis Martin knew how, in a few years, to gain his place among the visual artists recognized in Africa. At the age of 32, he had already exhibited on all five continents.

At the academic level, in 2006 he left the Aquinas High School of Nairobi and in 2010 he did so at the arts center, Mukuru Art and Craft, before dedicating himself to training in neurolinguistic programming and family constellation therapeutic methods, which is at the very least unusual for an artist. Onyis Martin is perhaps principally a painter, but his work as an artist goes further, with facilities and results that do not lead to indifference.

After his beginnings in his country, MARTIN’s works spread rapidly around the world from a fair in Taiwan, houses in Germany and Poland, exhibitions in Australia, participation in 1.54 art fair in London since 2016, New York in 2017, etc. His presence is prominent in several exhibitions of large institutions in South Africa, including the Cape Town Zeitz Museum in 2019.

The works he presents are large canvases onto which several materials and media are glued, giving the work a very characteristic aspect of old walls of posters. They appear, in a palette that is dominated by blue/green and black/brown, as a pile of torn paper, of traces, of diverse colors, of figures and writings painted by the artist that settle on the background.

And the same half-torn photo of a child, always the same, a photo of identity found by chance, that personifies the wall and that stares us in the eye, with infinite nostalgic sweetness. The title of the work appears among the entries that are found below it and does not illuminate us too much about the intentions of the creator; "Hôtel", "We sell turf" followed by a telephone number etc.

If we look carefully at the fragments of the poster that remains, it is easy to see that these are small signs that show through, without order or measure, the walls of our cities, promoting both fumigation and pest control services as well as the recovery of erectile function for men!

Reading the artist's words is quite easy despite an intentional disorder and deliberate confusion. By showing us our own walls, as our contemporary civilization embellishes them or clutters them according to our own vision, Martin Onyis returns us to our urban modernity, a modernity in which not only this contemporary youth moves and of which he is an integral part, but also where older generations are forced to adapt under the pain of disappearing. His view of the world around us is universal as these walls are similar to all the walls of all the cities on the face of the planet. It also perfectly symbolizes our consumer society in which everything is exchanged and everything is sold, everything is a deal and everything is organized, be it our dreams or our pleasures, our fears and our nightmares.

We know that the artist is very committed to the issues that challenge him, from the image of all humanity, to trafficking of any kind, human migration, plagues of corruption in both the political world as well as at the institutional level. Added to this are the technological advances that revolutionize our universe and our humanity that are so difficult to follow and make one’s own. Information, consumption, these posters are here to remind us of these two pillars of our contemporary society.

By offering us the examination and evaluation of the representations of our world, supported by the fixed gaze of a child, is the artist, consciously or not, precisely placing us in a demonstration of neurolinguistic programming? There is no explanation of the causes or effects, only a direct and brutal representation of a reality that does not need language, while at the same time it is full of fragments of writings in very different languages; a modern interpretation of the Tower of Babel. Onyis Martin scans us, interrogates us and presents his world, our world, as it can be under all its latitudes and, in this way, aspires 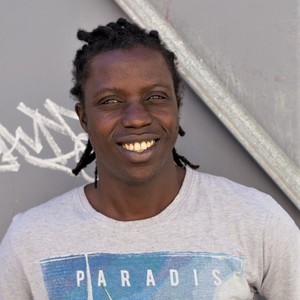