Born in 1962 in Tehran, Iran, Reza Lavassani earned his Bachelor’s degree in painting from the University of Tehran’s Faculty of Fine Arts in 1991. He is acknowledged for his oil paintings and his sculptures. After spending years studying literature and mythology, Lavassani’s main interest remains ancient Eastern philosophy, religion and history, central to all that he creates as an artist. He uses his own developed techniques to create unique shapes and forms. He is also known for his use of traditional methods of art making, namely oil paint on canvas for his paintings and techniques of papier-mâché for his sculptures. He was the recipient of UNESCO’s Noma Concourse in 2007 and 1994 and of the first prize of Tehran’s 4th Biennial of Sculpture and 6th Biennial of Illustration. 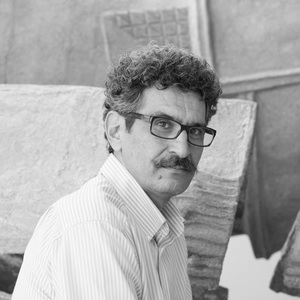