Sahi graduated from Baghdad’s Institute of Fine Arts in 1968 and from the Academy of Fine Arts at Baghdad University in 1971. He continued his training in Paris at École Nationale Supérieure and the Université de la Sorbonne from 1980 to 1981. Sahi also published a London-based satirical newspaper, Al Meirasha from 1992 to 2002. For the past three decades, he has lived in London yet acquires continual inspiration from the rich cultural heritage of pre-Islamic Mesopotamian civilizations, namely Sumeria, Babylon and Assyria. He exhibited at Meem Gallery in UAE, in 2015.

Frequently drawing his subjects from quintessential scenes and characters of Iraqi life, Faisal Laibi Sahi is a socially engaged artist whose work sometimes has a satirical and theatrical quality, and often acts as allegories for social, political, and historical events. In this painting, Sahi depicts a mournful funerary scene. The monumental work conveys the linear spatial configuration of a funeral procession whereas the repetition of the figures suggests the importance of community in the bereavement of a martyrs’ life. 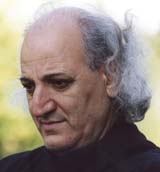