Born in 1985 in Aleppo, Syria, Majd Kurdieh lives and works today in Lebanon. His childlike paintings are recognised for his use of recurring whimsical figures and for telling stories with strong morale and positive encouragement. In the past four years, Kurdieh has created a cast of characters, the Fasaeen (meaning tiny ones in Arabic), the two main ones being Fasoon, the boy, and Fasooneh, the girl. These characters are noted for their perpetual smile despite the hardships that they endure. Through his art, Kurdieh draws attention to issues that deserve to be represented truthfully. Kurdieh’s works can be found in public and private collections including the one of HE Dr. Zaki Nusseibeh’s private collection. 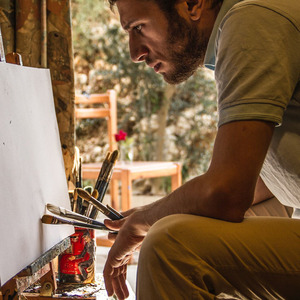