VIVIEN KOHLER (1976) is an experimental mixed media painter based in Johannesburg, South Africa. He received his National Diploma in Fine Art from the Ruth Prowse School of Art and Design in Cape Town, 2000.

The concept of liminality; the liminal city and its people, lies at the core of Kohler’s work, which explores migration, marginalization and displacement in the urban landscape of post Apartheid South Africa. “His work has an immediate and intimate relationship with the materiality of the city” - Prof. Gore

“My works do not hide the realities of the unfair perception, but symbolically display it in relations to the liberating verdict of the human spirit”

Fascinated by mans ability to transcend ‘the conceptual decay’, he captures with gentle rawness the complexity of human disposition. His work seeks to illuminate the duality of lived experiences by depicting, with an air of surreality, meditative moments of the individual, mentally cocooned from, yet physically enveloped by life’s detritus.

Kohler has exhibited in art fairs and group shows locally and internationally ("Is There Still Life" curated by Prof. Michael Godby which featured William Kentridge, Penny Siopis and Willie Bester). He has produced two solo shows to date; Given to Fly (2012) and De(re)tritus (2014).

He has received awards; the ItWeb / brainstorm competition (2012) with his entry commissioned by Vodacom, and in 2013 he was the winner of the Lovell Gallery artist competition. His work is housed in both public and private collections, namely the Nandos Collection, the Hollard Collection, SAB and Fusion UK. 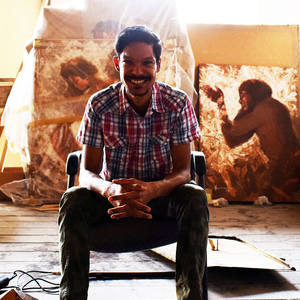