Artist Charles Khoury was born in Lebanon in 1966 and graduated from ALBA in 2005. He teaches Fine Arts at the Saint Joseph School Antoura. He is a member of the Salon d’Automne of the Sursock Museum, the International Association of Fine Arts - Unesco in Paris, and the Association of Lebanese Artists. His art is a mixture of intertwined primal shapes and playful colours. His work has been displayed in solo and group exhibitions in Lebanon, Syria, Egypt, Kuwait, Dubai, Abu Dhabi, Ivory Coast, Bangladesh, UK and France. In 2008, the Nicolas Sursock Museum in Beirut granted him the “Special Jury Award”, and he won the “Artist Residency: Lithography workshop” in Morocco in 2013. 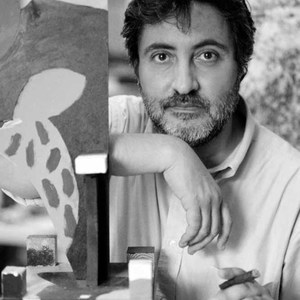