He taught drawing at the San Fernando Institute in Madrid in 1970. He also had numerous exhibitions in Lebanon, and abroad, including Kuwait, Syria and West Germany as well as in the Biennales of Sao Paulo ( Brazil), Alexandria, and Baghdad.

His canvases are expressed in multiple languages; with total candor he sets forth the multiple movements of his self, in the manner of very great artists who act only on the prompting of some inner transport, an inspiration coming from the depths of his faculties and his innermost impulses. There, he also records the sensation he has of the weight of irremediable anguish born of solitude and the violent desire for a universe on whose threshold fear would stop. 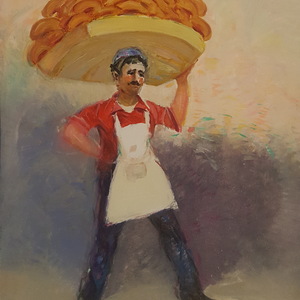