Hasko Hasko born in 1973 Aleppo, Syria. He graduated from the Faculty of Fine Arts at the University of Damascus in 2000 and specialized in oil painting. He states: “Now, with Syrian art fetching high prices on the international market, life is becoming easier and artists are gaining more respect. Before, we were considered crazy. That’s completely changing; now, we’re becoming respected like poets and directors.” Since 2002, his work has been the highlight of many solo exhibitions and group shows in Syria and around the world including in London, The United States, Iraq, Lebanon, UAE, and in Turkey. The themes in his contemporary paintings focus on nature, animals, and mythical figures that are inspired from Mesopotamian cultures. They are treated mainly in acrylic paint or mixed media, with low-key colors and defined brushstrokes in compositional clusters. Hasko fled the war to Turkey in 2013 and, the following year, journeyed on a lifeboat through the Mediterranean in order to reach Europe. The artist made it to Denmark, where he since has been living as a refugee. “A Perilous Journey,” a project which chronicles the journeys of three Syrian war refugees traveling from Syria to Europe (one of which is Hasko’s story), was launched at The Nobel Peace Center in Oslo, as well as serialized in an animated comic and published in The Guardian and Aftenposten on November 12th, 2015 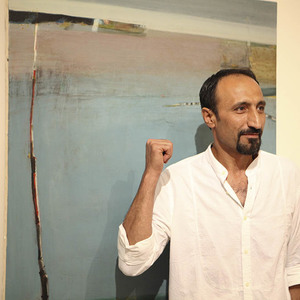