Born in 1957 in Basra, Iraq, Hashim Hannoon graduated from the Institute of Fine Arts in Baghdad in 1979. He holds a Bachelor’s degree in Sculpture from the College of Fine Arts in Baghdad. He is a member of the Iraqi Artistic Forming Assembly, as well as the Babylon Assembly of French Arts. After the Iraq war broke out, Hannoon spent a few transitional years in Jordan, and later on, in 2009, he immigrated to Canada where he currently lives and works. Since relocating to Canada, the notion of the city has become a dominant theme in his paintings. Through his art, Hannoon invites the viewer to experience his vision by capturing the essence of the community and how it enriches the city. 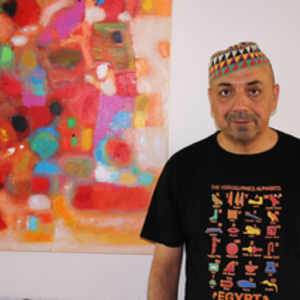