Armenian artist Janet Hagopian was born in Khoramshahr, Iran, in 1967. Today she lives and works in Lebanon. In 1995, she graduated with an MA in Decorative Applied Arts from the Yerevan State Institute of Fine Arts and Theatre. She is a jewellery designer and has worked with numerous international jewellery companies. From 2007 to 2011, Hagopian was the art director at the Toros Roslin Art Academy at the Hamazkayin Art Centre in Lebanon. She has been a member of the Hamazkayin Lucy Tutunjian Art Gallery committee since 2010. Her paintings offer an insight of the social and religious realities that shape her identity as an Armenian woman, and the identities of Armenian women living in the Middle East in general. 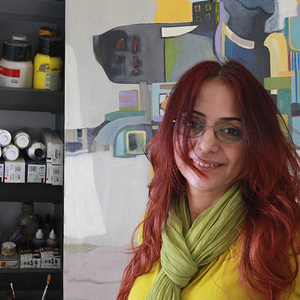