Paul Guiragossian, grandson of the renowned Paul Guiragossian and paints under the name Paul Gossian, was born in Lebanon in 1990 into a dynasty of gifted painters, into a world full of expectations. His paintings translate his inner torment as he struggles to understand and establish his identity as an artist, and as a citizen of two worlds. From the Renaissance period, artists investigated the self through portraits. Paul sets his one on one rendez-vous with the great masters to draw their portraits, and capture their spirit. As such, he acknowledges their influence on his work and establishes a sense of bonding and belonging with the masters of all times. Gossian fled to Germany in 2006. He then moved to London in 2011 to study Fine Arts at Camberwell College of Arts, graduating with a BFA in 2014. During his years in London, Paul participated in several local group exhibitions. Gossian's works featured in the Beirut Art Fair for three consecutive years. 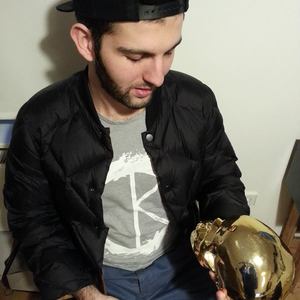