Amal Kamar’s artwork is both conceptual and embodied, inspired and mastered. It reflects life and movement. It comes in geometric curves and small spirals side by side which, through their continuity, restore the dynamics of gestures and shapes. We recognize her vigorous and swirling brushstrokes that maintain the figures in their initial course and describe their movement in space and time. We find the same dynamic in her terracotta sculptures, .

Artist, painter and sculptor, Amal Geara Kamar was born in Lebanon. After training at the Academy of Fine Arts, she began her professional activities by drawing fashion and by designing Lebanese stamps adopted by the Lebanese authorities.

When war broke out, she took refuge in France in 1976, where she devoted her time to painting and sculpting. She also lead painting sessions for teachers from the Lycée La Rostagne in Antibes where she did set up her workshop. In 1990, she moved to Paris where she expanded her experience in sculpting in workshops of the Academy of Creative Arts. 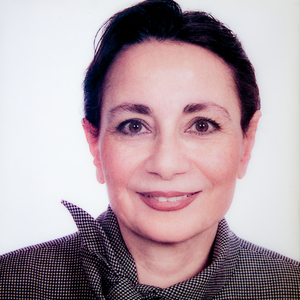