Younes Faghihi was born in 1981 in Iran. After graduating in Graphic Design in 1999, he received his certificate in Calligraphy from the Iranian Society of Calligraphy in 2001. He earned his Degree in Visual Arts and decided to devote himself to this field in a professional and academic setting, therefore In 2010, Younes was invited to carry out artistic research at the Cité Internationale des Arts in Paris, where he is currently based. He creates unique forms and beautiful structures which evokes emotions and bring conceptual meaning to words. For Younes, every alphabet is like a character with feelings and emotions. He gives live to words by creating new movements and modern forms. He explores visual rhythms, flows and abstract shapes to create a new but universal language through which he express himself. To him the meanings of the words are less important than the form of calligraphy as the means of expression. He spent many of his childhood years in the heart of conflicts during Iran-Iraq war and lost his father in the war. That’s why peace and love are very central to his works which reflect very private and personal experiences and communicate with people in a way that there is no dialogue. 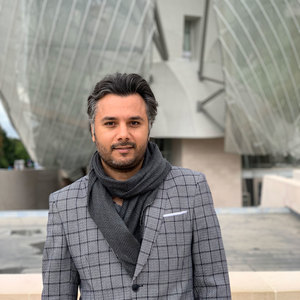