“My contemporary work draws its essence from the roots of Arabic calligraphy,” says Mouneer Al Shaarani. "I shed light on our calligraphic heritage by adding a critical look to it, to free it from its golden cage. Its inertia and the conventions [of calligraphy] have limited it to sacred texts, isolating it from all other social life. I thus seek,” he adds, “to consolidate the position of calligraphy within the fine arts.”

Born in Salamiyah, Mouneer Al Shaarani (1952) graduated from the Faculty of Fine Arts, Damascus University and studied under the great Syrian calligrapher, Badawi Al Dirany. Working as an artist, writer and book designer, he has also designed several new Arabic fonts. As a result, Al Shaarani is highly regarded internationally for introducing uniquely innovative calligraphic styles, striving to bring the ancient tradition of Arabic lettering into a modern context. 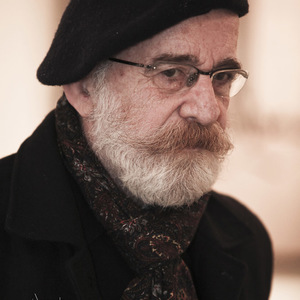