Slimen El Kamel was born 1983 in Sidi Bouzid, Tunisia. He lives and works in Tunis, Tunisia

Slimen El Kamel was born in Mazouna in the region of Sidi Bouzid in Tunisia. Nurtured in the popular narrative, his childhood was moulded by the imagination of the rural environment where the tradition of folk tales and poetry flourished. His studies at the Higher Institute of Fine Arts in Tunis allowed him to crystallise this literary and intellectual heritage into a singular artistic practice. A practice whose genesis opens through writing and draws its resources from its texts, sometimes poetic or literary, sometimes memorial or improvised. The daily writing exercise, while it delimits, extends the horizons of its physical universe.

His more recent work considers the links between the human body and everyday consumable objects. El Kamel considers the ways in which virtual and lived reality hinge upon visual and auditory channels of communication. Through figurative, symbolic and abstract forms he creates at once a narrative unfolding on the canvas and a subtle critique of the effects of mass culture on traditional ways of life.

El Kamel holds a Masters in painting from the Tunis Institute of Fine Arts. He has participated in exhibitions and art fairs in Africa and Europe. El Kamel was an art resident at the Living Arts Center at Rades for a year and paid multiple artistic and research visits to Paris, Algeria, and Bahrain. He was a finalist of the inaugural Sovereign MENA Art Prize in partnership with Start. This prize awards 30 of the most exciting mid-career artists across the MENA region with an exhibition in Alserkal Avenue, Dubai (2016). The artist is also active as an art critic. 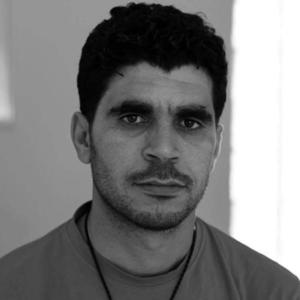